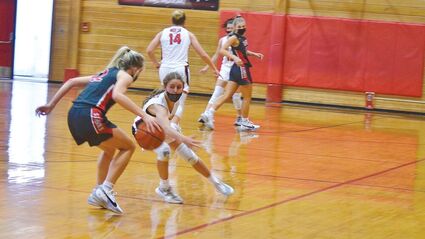 Paige Mace made the King's offense work to bring the ball down the court in the Lady Mules' closest game of the week. They beat Kings High School 49-43. Mace, a senior, hit 1,000 career points in an earlier game this week against Morton/White Pass.

With three games in the last week, the Lady Mules really only ran into one serious challenger on Saturday, when they hosted a 1A team from the Seattle area, Kings High School. The Lady Mules managed to eke out a win that day too, to bring their overall record to 10-1.

"MWP got off to a hot start turning offense into defense," Coach Rob Garrett said. "Paige (Mace) went over 1,000 career points which was a great milestone for her and Emmie (Niemela) had a career high. It was a good game to get some confidence rolling into the big match up with Kings on Saturday."

"Kings was the best defensive game we've played this year," Coach Garrett said. "I thought from start to finish the girls just continued to get better and better. Courtney, Paige, and Reigha (Niemeyer) did a great job of frustrating their best offensive player and really took her out of the game mentally with their defensive pressure. Inside we gave up some initial pick and rolls, but the girls learned as the game went on and really tightened things up. Offensively, Paige controlled the pace, Jansi led the way, the rest of the team hit big shot when they had the chance. Overall it was the most fun I've had with this group this year. The atmosphere was great. Our girls know that pressure is a privilege and they most certainly stepped up to the challenge."

On Tuesday, the Lady Mules beat Stevenson 79-4, in front of a home crowd that was supportive enough to throw up a cheer both times the Bulldogs were able to add to the scoreboard.

"Tonight's game was senior night," Coach Garrett said, "and the seniors did a great job showing off their talents and getting everyone involved. This has been a fun group to have come through that has put a lot of time in the gym and they've done a great job making the most out of this crazy year."

"Not only did all of our seniors score," Coach Garrett added, "but Paige and Jansi both had stellar stat lines. It was a great way for them to finish their last regular season home game."

The Lady Mules finish their regular season at R.A. Long on Friday, and district play begins on Monday at