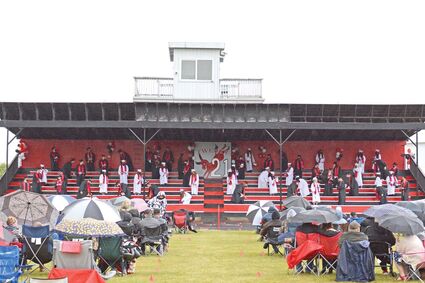 With the largest class in recent history, Wahkiakum High School took graduation outside to make room for family and other well-wishers to celebrate the Class of 2021.

Unfortunately, it was a rainy June day.

Following the procession, Valedictorian Jake Leitz welcomed his class, the crowd seated in the football field, and people watching the ceremony online.

"Although we missed out on a lot as a class over the last year and a half, my experience at Wahkiakum High School and my graduating class has been something I will cherish for the rest of my life," Leitz said. "Instead of thinking about what could have been, I think it is important to be thankful for what we gained in our experience at Wahkiakum."

He expressed gratitude for his teachers and an education that prepared him for the future, as well as appreciation for the opportunity to play sports, and to be able to spend time with coaches who challenged him.

"I've got to say the heartbreaking endings started to get a little old," Leitz said of his experience with high school athletics. "I don't think there are many high schoolers that can say they have been eliminated from state on a walk off home run, a Hail Mary touchdown, and a buzzer beating three pointer like we have."

Class Speaker Kaleo Silva spoke about the things that made his class great but also expressed sadness about some of the losses that came with the pandemic.

"I feel sadness because when I look up at this group of my very own classmates, I see faces that I have not seen since March 2020," Silva said. "I feel sad because I look at some of the students who are new this year and realize I have not had real introductions or conversations with a good portion of them. The reason that this makes me so sad is because I love my classmates. I love that all of us only had to attend the same school and be born in the same year to have so many things in common."

"Look out world, the Class of 2021 is coming your way. If covid couldn't keep us down, then there is nothing you can do to stop us," Silva added. "Go Mules!"

Principal Stephanie Leitz gave out awards, including the Activities and School Involvement Award, which was given to Teylor Sauer and Kaleo Silva; the Excellence in Athletics Award, which went to Jansi Merz and Ashden Niemeyer; the Leadership Award which went to Jake Leitz and Ellie Wiltse-Hiatt; and the Citizenship Award which was given to Shannon Dela Cruz and Beau Carlson.

Ellie Wiltse-Hiatt, who spoke as the faculty selection, talked about the teachers and staff at Wahkiakum, about practicing gratitude in Audrey Petterson's class; Kyle Hurley's constant charge to students to "make a difference," and Principal Stephanie Leitz's question, "Are you going to be someone who watches things happen, makes things happen, or wonders what happens?" 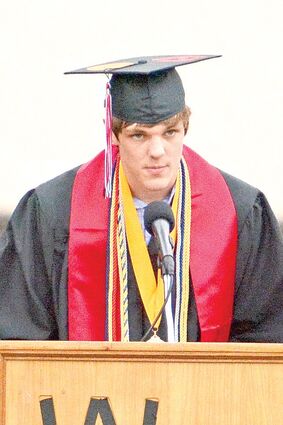 While Superintendent Brent Freeman spoke, the rain began to fall in earnest. It didn't stop the seniors raised in the Pacific Northwest as they made their way to the platform to collect their diplomas.

"We could not have done it without everyone here today," Salutatorian Kaden Anderson said, giving thanks to teachers, coaches, family, and other people in the community, before leading his class in the alma mater.