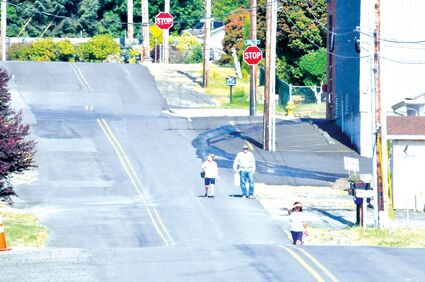 Elochoman Slough Marina visitors made their way through the recent heat back to the marina after a shopping trip in downtown Cathlamet.

The Wahkiakum County PUD crew has been known to go out in stormy conditions when the power goes out, but this Sunday, they were out in the hot sun responding to a few outages, some of which were caused by equipment failing in one way or another in response to the high temperatures.

They crew began their day around 11:25 a.m., according to General Manager Dave Tramblie, when the PUD received a call to the 500 block of East Valley road, where some trees were burning.

"I think what happens is that it gets so warm that the conductor starts to sag," Tramblie said. "It sagged down into some trees. They had to run out there and clear that up."

According to the sheriff's report there was a power outage in the area.

Another power outage was reported at 4:27 p.m., and the crew headed to Grays River to repair a high voltage disconnect made of porcelain.

"It just broke," Tramblie said. "It is actually pretty common when we get really warm. We don't like it, but it's not something that is unusual for us."

The PUD repaired two more porcelain high voltage disconnects, one on East Valley Road around 6:45 p.m., followed by another on West Birnie Slough.

The longest outage of the day came when a resident on North Welcome Slough reported a loss of power around 7:30 p.m.

"It was a tough one for the guys to find," Tramblie said. "It took them awhile, but they finally figured out what it was."

It turned out an older piece of equipment, an oil switch, had failed. A few minutes after 9 p.m., the crew was finally able to get the matter resolved and head home.

All told, Tramblie believes that less than 100 people were affected by the outages, and that the longest one was the final one of the day, which lasted about two hours in crew activity.

"It was hot," Tramblie said. "We were pretty fortunate."

On Tuesday, he did not believe that high loads were a factor in power outages over the weekend.

"It was nothing compared to what we get in the winter," he said. "I think it's because we don't have a lot of air conditioning. I'm sure loads were up more than on an 80 degree day, but nothing significant enough to where it caused real issues."