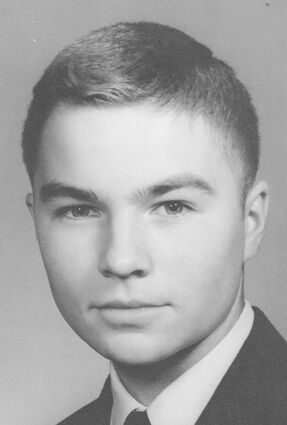 the days of my life, and I will dwell in the

house of the Lord forever. Psalm 23:6

Kenneth James Kandoll passed peacefully on July 19, 2021, at the home of his son, Cameron, and daughter-in-law, Catherine, after a five year diagnosis of progressive neuromuscular palsy. With loving and attentive care from them both, he met the physical and emotional challenges of this debilitating disease with the fortitude of his Scottish, Norwegian, Finnish forebears and an acceptance provided by his abiding Christian faith. Ken saw every day as a new day, a day to get up and do something for someone less fortunate than you, and give thanks that you had so much to be grateful for.

Born to Walter and Mary Kandoll on February 23, 1948, the eldest of their four children, he was a kind child, blessed with a sunny disposition. The family farm in Deep River, Washington, was the site of many childhood adventures.

Ken's middle school years were spent in the remote village of Bamfield on the west coast of Vancouver Island, Canada. The three room school house provided instruction through 8th grade, so Ken came back to Washington to attend Naselle High School. Returning in 1962, he stayed with Clarence and Glenrose Hedlund until his family could emigrate back to the States.

Among other pursuits, Ken was active in student government, debate, band and choir at NHS. After years of coronet practice, he was honored to attend Music in May at Pacific University in Forest Grove. Of his athletic endeavors (cross country track), he would later say, "I was never very fast, but I always finished."

Graduating from NHS, Ken enrolled at Western Washington University, earning a BS in chemistry. Ken's ROTC Commanding Officer at WWU advised that while Ken didn't meet the height requirement for Coast Guard officers, he was recommending that the requirement be waived for Ken because of his outstanding character. During his service, Ken was recognized as an expert pistol marksman.

While stationed in San Diego, he met his first wife, Linda (Ann) McCune and became dad to stepdaughter, Chairi. In 1974, Chairi was joined by brother Cameron. After USCG years, the young family moved back to Naselle and settled into a small house on Knappton Road and became active in the Naselle Lutheran Church. The Coast Guard motto is Semper Paratus (always ready) and Ken was always ready. Ready to tell people about Jesus and what he did for us so that we could live fully.

Single for several years after he and Linda divorced, Ken met Donna Bigham. They married in 1986, and church and faith became a pivotal part of their life together. Their family now included Donna's children, Betty and Andy and Ken's son, Cameron. Later they would also help raise two grandchildren, Trisha and Crystal, and reach out to members of their church family. Donna had a dream of becoming a farmer, so soon there were animals and fields to tend, cows to milk, butter to be made. Ken trained as a carpenter, joined the Northwest Carpenters Union, and helped many folks in the community. He also put his skills to use building a home on the north end of their property.

In Ken's last years, he delighted in receiving and answering correspondence from many friends, helping at the senior center when he was able, and spending time with family and pets, Wally, Angel and Bootsie. He was grateful for the care and friendship of his aide, Luisa, and the staff of the King County hospice who all helped so much in his quality of life. Ken will be laid to rest beside Donna, who passed in 2013. Family will gather at a future date for a private ceremony at the pioneer Deep River Cemetery to honor Ken. He would ask that we go forth and spread joy, peace, happiness, forgiveness, compassion, love, and faith to all. Condolences may be made to the family by reaching Cameron on facebook or through email: kandoll78@gmail.com.