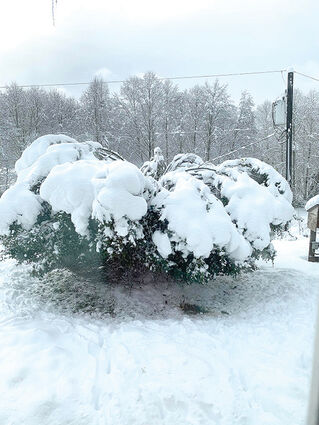 WHITE CHRISTMAS--For all those folks who were wishing for a white Christmas, it certainly looked like you got your wish! I had hoped we'd just get a couple of inches but Sunday's snowfall was quite impressive, that's for sure! The heavy snow brought branches and trees down and caused some power bumps and even power outages. Then there were the clumps of heavy snow/ice which fell from the trees and caused some windshields to break, so the snow caused some extra hazards to watch for that some hadn't thought about.

By Monday morning we had accumulated even more snow and I was definitely hearing the snaps and cracks of multiple trees around my area as they gave way to all the extra weight from the snow freezing solid overnight. As I look at my temperature gauge, we are a balmy 22; time for more coffee!

DIFFERENT DEPTHS--Around here you'll find that a half mile one way or another can make a huge difference in snow depths, so while some were enjoying a dusting, others had a manageable 4 to 5 inches, while others were buried in the stuff! My friends on top of Beaver Creek said they had 16 inches of snow by early Sunday afternoon!

For those who are new around here, Beaver Creek Road is usually our alternate route to get to Longview but with that much snow, I'd say that's not a great option right now! Even taking the ferry and going on the Oregon side had its hazards as there are some steep hills that way.

GRAUPEL ANYONE?--Did you happen to get any little round white "beads" at your house during all this snow? They almost look like little, tiny styrofoam balls and it's not hail, or sleet which are more clear looking, but really, really round white balls, and if you did, well, that stuff is called "graupel." Technically, this is a snowflake that collects supercooled water droplets on its surface and gives us these little white pellets.

WERE YOU PREPARED?--Once again, this weather system has given us a little reminder that mother nature rules and we are at her mercy, so how did you make out with all your winter preparations this week? Temperatures were forecast to go down in the teens this past week. I hope you had all those outside faucets wrapped and hoses put away, etc. How about your food supply? Did you have enough things on hand so that you could stay home and not have to risk going out on the snowy roadways to get something? What about your animals? Did they have food and water and shelter so that they didn't have to suffer needlessly? I hope so. At any rate, with this being just the beginning of winter, I hope everyone managed to get by okay and if not, you learned a little lesson and can plan ahead for the next round of miserable weather which is surely bound to come our way. I just hope it isn't too soon!

THANKS--This past Sunday there were multiple outages around our area, and out here in West Valley we had a couple of short ones and quite a few "blinks" but we got lucky for a change and didn't have a long outage thankfully. However, some folks lost power in East Valley and others lost power East of Cathlamet and even West of it while Hull Creek was without as well, and so we know the PUD crews were working real hard to get everybody back up and going as soon as they could, so a big shout out to the county PUD crew, as working in these conditions is certainly no fun and certainly interrupted their holiday plans!

Those celebrating anniversaries this week are Mr. and Mrs. Mark Helms, Mr. and Mrs. Larry Johnson, Bob and Linda Roseberry and Mr. and Mrs. Richard Bigler. May all of your special days bring you good times and lasting memories.

FRIDAY NIGHT--New Year's Eve falls on a Friday this year, so weather permitting, I'm guessing there will be lots of folks wanting to get out there and help bring in the new year. Let's continue with our "support local" theme and enjoy a night out on the town and a fun time bringing in the new year.

JANUARY CRAB FEED--The VFW Deep River Post will host their annual Crab and Oyster Feed at the Rosburg Hall/Community Center. Be sure to get your tickets now so that you don't miss it. This will take place on January 29 and you can purchase tickets from Danny Eaton on Puget Island or in the west end, contact Ken Elliott.

WELL WISHES--I know there are several folks who have been under the weather lately and several of them have been classmates of mine, and while not naming names, I do wish all of them the very best in their recoveries from their various issues. I've also got some out of state family members dealing with Covid and of course, I truly hope they aren't dealing with any serious issues from it and wish them a speedy recovery.

SHOEBOXES--The "Shoeboxes of Joy" were certainly a big hit and the group that started that whole idea are already planning ahead for next year. They have quite the wish list going so if you're one who likes to plan ahead and shop during the year when you see a special, now would be a great time to check out their list and maybe tuck away a few things to donate next year. If you don't want to store things that take up room, then maybe you could stash some cash so you can donate that when the time comes.

A couple of their bigger wishes are that they'd like a public place to store donations, and then be able to assemble them at that same spot from the first part of November through December; and they'd also like to have some of those heavy duty metal Costco shelving units to hold them all on.

OUT OF THE PAST--The last two days of 1951 were very cold and clear but it made all the snow sparkle and shine and was truly beautiful. A picture in the Longview Daily News showed a lone swan swimming in Lake Sacajawea surrounded by the snow covered banks and it was quite a serene picture. The kids in the area were busy building snowmen, snow forts and even snow sculptures in the area so it was an exciting time for the children as the year came to an end. For Ralph and Elsie Everest, the last day of the year meant they saw another year of marriage, so they headed to Millie's restaurant on Main Street in Cathlamet to enjoy a wonderful dinner to celebrate their 38 years together. For other folks in the area, it was time to head to the Norse Hall on Puget Island as it was time to dance at the "Firemans' Ball" and everyone had a marvelous time ringing in the New Year! This according to my Grandma Elsie's diary.

SHORT COLUMN--Due to the fact that I keep getting "power bumps," which shuts down my computer and I have to totally reboot, besides losing part of what I just wrote, I will be turning my column in early. My apologies for leaving out some things this time, and here's hoping we have better weather next week so we aren't dealing with heavy snow laden branches and all the other inconveniences that this snowfall has brought us.