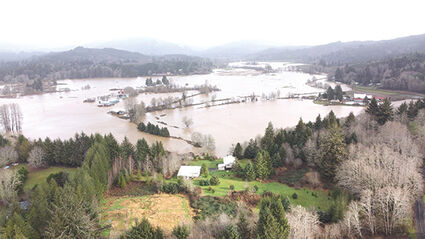 The Grays River went into flood stage last week. The view looks to the east, with the Covered Bridge near the top of the photo and the Zimmerman Farm on Barr Road at the righht. Photo courtesy of Charlie Shumar.

A day of heavy rainfall last week has left Wahkiakum County residents dealing with flooding and other storm related incidents.

Heavy rain arrived last Wednesday and kept coming into Thursday, melting the previous snowfall to send streams out of their banks and hillsides sliding down onto roads.

"Wahkiakum County Roads had significant snow damage from trees and limbs falling. Elochoman Valley Road is still not completely open above 8 mile marker due to trees and limbs on the road.

"Beaver Creek Road is one lane at the 2.5 mile post from a slide that occurred. Schraum Road-Beaver Creek culvert was washed out from the rain and snow melt off. There were several families trapped.

"East Valley Road was washed out at mile post 5.3 due to a large debris flow down the North Fork of Wilson Creek. The county road culvert was blocked resulting in the creek cutting a new channel down East Valley Road and threatening a residence. There were several residents trapped with no way to get out behind the washout.

"The fairgrounds was flooded and appliances were damaged and will require flood debris clean up.

"Oatfield Road had a slide trapping one family.

"There was a slide on Hungry Highway closing the road for several days.

"All the above has been either fixed or cleared. East Valley Road will require a significant repair to bring it back to pre-flood condition." 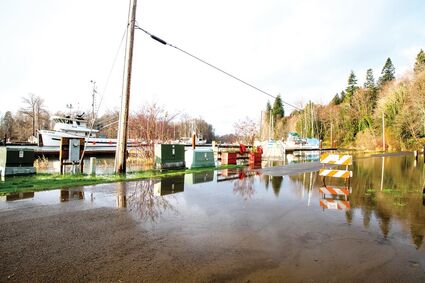 King tides back up already high water along the Columbia, including at the Elochoman Slough marina.

SR 4 also experienced landslides and high water closing the highway at Seal River, Deep River and Naselle. There were two roll over accidents Monday near the Cowlitz County line.

Wahkiakum County Emergency Services Director Beau Renfro is asking anyone with December or January storm damage to submit a report that can be used to bolster an appeal for federal disaster aid.

Initial damages by any of the below methods:

--By emailing Beau Renfro at renfrob@co.wahkiakum.wa.us with your information.

--A printed form can also be picked up at the Wahkiakum County Sheriff's Office in Cathlamet 24 hours a day.