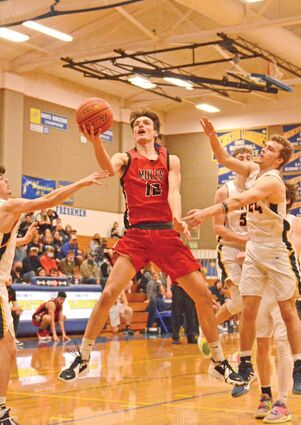 Making it to regionals has been the Wahkiakum Mule boys basketball team's goal all season, and they've been making up for an initial loss in district play while ending seasons for Onalaska and Forks in the past week in their singular drive to reach that objective.

The Mules advanced last Wednesday when they beat Onalaska 62-48 in the first of a series of loser out games.

"We definitely got off to a slow start," Coach Todd Souvenir said. "They had us on our heels a little bit in that first half. They were face guarding Brodie [Avalon]...and that got us out of our offense a little bit. At half time we talked about using that against them, getting the ball inside, focusing on pushing the ball up the court, and seeing our teammates. In the second half, I thought we did that. We got the ball inside. Titan [Niemela] went 9-10 from the field, and Dom [Curl] was 5-6 from the field and did a lot of good things to get us going and get us over the hump and get a comfortable win in that game so we could move on in the bracket."

On Friday, the Mules beat Forks 65-50 in a second loser out game.

"We came into the game thinking we were going to play man to man and be aggressive," Coach Souvenir said. "They came out and hit their first couple shots and did a lot of good things and we trailed 9-2 and called time out. We switched and went to a 2-2-1 press into our 2-3 zone. We got a lot of deflections. Brodie [Avalon] had a couple nights where he struggled and tonight he was feeling it. The team did a good job getting him the ball. He had his best game of the year, percentage-wise, shooting 4-5 for two's and 7-11 on three's for 29 points. He had a great game. It was nice to see his confidence come back."

"The guys had a lot of fun together, on the court and on the bench, and hopefully that's some good momentum going to the Ilwaco game," he added.

The Mules faced Ilwaco in a loser out game on Wednesday and the score was not available at press time. The winner plays Friday, time to be determined, in Chehalis. For updates and scores, check The Wahkiakum Eagle Sports Report on Facebook.