This week, the spotlight is on Landon Luce. 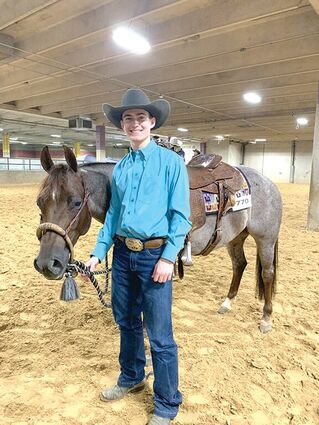 Landon Luce and his horse Kitty, whose registered name is Time To Lay It Down. Courtesy photo.

Wahkiakum High School senior Landon Luce, who recently turned 18, is ranked first in the nation and fourth in the world in the National Reined Cow Horse Association.

And he is now as high in the association as one can get without being a horse trainer.

The world standings were determined at the world show in Fort Worth, TX, where people from all over the world gather to compete. It's by invitation only, and you get one of those by winning money in other competition.

He competed against 35-40 other riders in the preliminary rounds, finishing in the top 10. He went on to the finals, where he took fourth place.

"The world standings are kind of confusing," Luce said. "You would think it was a year average, but it's just that show."

As for his first in the nation, it was in the non-pro hackamore, competing against 95 other riders. Unlike world, this category is based on how riders do during the year.

"You win by being the best, doing the best throughout the whole year," he said. "It's about consistency."

"It feels very good to come out on top sometimes," Luce added. "I don't win all the time, but it feels good when I do."

"It's a lot of time on the road, Luce said. "Several of those trips I did by myself with the horse trailer and the horses."

The barn names for his two horses are Kitty and Princess.

He laughed. Yes, he gets ribbed about it. Their registered names are Time to Lay It Down and Raising a Princess, respectively.

"Princess is a good horse," Luce said. "People start giving me a hard time and I tell them they're just jealous they don't have a horse named Princess."

What makes him good?

"That I go ride five days a week," Luce said. "It's for sure the work. There is no way to get good at something unless you practice it. The only way to get better at this sport is to do it."

He drives to Battle Ground five days a week after school to practice with his trainer, Trent Pedersen. During the summer, he's frequently there all day.

"It is a very humbling sport," Luce said. "It's one of the hardest equine disciplines you can choose to do, because your horse is doing three different events, reining, cutting, and going down the fence."

And, he pointed out, it's not just your horse. You are working with another live animal.

"It throws another curve ball in it, because cows aren't always the best to work with," he said. "You can go from hero to zero in a matter of seconds. Everything happens so quickly. The goal is to get the cows to go fast, to run fast down the fence and stop in front of them and turn them. You've only got milliseconds to make decisions, and if you make the wrong one, you can have several penalty points and your run can go out the door very quickly. It takes a lot of practice. A lot of people try it, aren't good at it, and stop doing it because it is so difficult."

He keeps at it for many reasons, some of which are immediate, like the rush of adrenaline, and some that have a more lasting good feeling, like the friends he has made along the way.

"I've been super lucky to have super good horses, and a super good horse trainer," Luce said. "I have fun doing it. I love my horse trainer. He's a mentor to me, someone I look up to. My barn family is a bonus family. I love everybody that does it with me. I call them my barn grandmas. They treat me so good. It's so rewarding to go to horse shows with them and we just have a good time. It's fun, I've got a lot of friends so every time I go to a horse show, I get to see all my friends."

His participation in the sport will continue long after he graduates from high school this year, and he hopes to help fund the activity as a commercial pilot.

"It was really difficult to do while also riding horses and school, because it's not like I'm taking the easy way out with classes," he said. "For awhile it was a lot, but I finished my private pilot's license, so I can fly other people with me."

He's been accepted to the Embry-Riddle Aeronautical University in Prescott, AZ, which he described as the number one aviation university in the world, but he's also considering an accelerated program in Hillsboro that would allow him to graduate with all of his flight ratings and licenses and start working sooner, building up enough hours to become a big commercial pilot.

"I love flying," he said. "I think I've told every single teacher here now that I would really just like to get this high school thing done and over with so I can go to flight school and be a pilot. I want to go start working and I don't think many people can say that, but it's not work when you love what you do."

"My favorite place to be is in the cockpit and the saddle," Luce said. "I just want to go to flight school, to start flying. I love to be in the air, it puts a total different perspective on the world when you are in the air, you can see everything from above. The views are amazing. It's like no feeling you get anywhere else. You don't have to deal with all the bad things, you only see the good up there."

Landon is the son of Cara Elliott and Casey Luce.