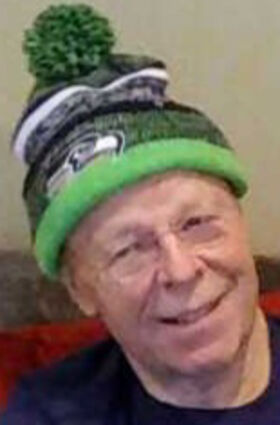 Longtime resident and beloved teacher, Terry Joe Bonny died on March 12, 2022 at his home in Cathlamet. Terry was 79 years old, born on August 6, 1942 in Sunnyside Wa to Lyle and Lois (Rathbun) Bonny. He grew up in the small Yakima Valley town of Sunnyside and graduated from high school there in 1960. He played freshman football at the University of Oregon, continuing his education at Eastern Washington University, graduating in 1965 and later earning his Masters degree.

That same year he moved to Cathlamet to begin his teaching career. On April 6, 1992 he married his beloved wife and soulmate, Reggie and they shared 30 joyful years together. He taught Health/Physical Education, Art and Drivers Ed, primarily. He retired from teaching in 2001 and continued teaching Drivers Ed until 2018 which earned him a State Teacher of the Year Award! Terry coached basketball, early on and Football, but Track and Field was his first love!! He was Athletic Director for many years but he found such joy in Art. He loved to doodle and share his treasures. Art was a wonderful part of how he will be remembered by everyone! Terry was loved by many and thoroughly enjoyed his "people connections" and former students. He was an avid golfer and will be sorely missed by his golf buddies. Terry and Reggie's favorite time was spent with their children, grandchildren and recent great grandchildren. He is survived by his Beloved family, wife, Reggie, Children, Becky Streett, Lisa Walker (Trever) Brenda Faber (Steve) Danette Flanagan (Sean), Dac Randall (Julie), Brothers, Marvin Bonny (Debbie) and Rollie Bonny (MaryAnn). Grandchildren, Lexi, Sydney, Samantha, Kelly, Michael, Trenton, Mikayla and Megan, Great Grandchildren, Sky and Jack, with acknowledgement to Chris King, Katie and Sammy and many treasured nieces and nephews. Terry was preceded in death by his sister, Veronica Zeimantz.

There will be no service at Terry's request but if you wish to honor him, donations may be dropped off or sent to Wahkiakum High School Track and Field Program, PO Box 398, Cathlamet, Washington 98612, in his name. Dowling Funeral Home is in charge of arrangements.