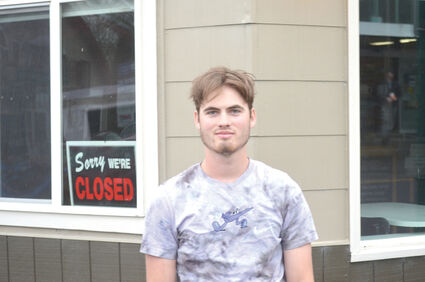 Kaden Anderson graduated from Wahkiakum High School last June, and in November became a landlord after purchasing a building on Main Street in Cathlamet that contains six apartments and four store fronts.

Last year when I interviewed Kaden Anderson, he was a senior at Wahkiakum High School, telling me about his first lemonade stand, his early interest in investing and business, and his plans for college.

I got to talk to Anderson again, this time as a 19 year old college student, landlord, and budding philanthropist.

Anderson is now the proud owner of a building on Main Street in Cathlamet that contains six apartments and four storefronts.

Anderson purchased the building at the first of November, not long after he graduated from Wa-Ki-Hi.

His plan after high school was to attend UW to study business and finance, but with his new venture, he has made a few adaptations, attending classes online, and switching to a real estate degree.

"All the finance classes had to be in person," Anderson said. "I couldn't do that, and real estate allows a little more flexibility with classes."

"I think it will make a difference in my future," he added. "I think I will be better off to work and learn here."

Anderson is very much interested in the business of real estate, but he also sees the human side and doesn't want to forget that. He wants his apartments to remain affordable, but more so, he's interested in a kind of philosophical rebrand. He wants housing to be attainable.

"I want to in some way positively impact the community," Anderson said. "There are a lot of successful people out there, and I think you can separate them into people who are making the world better and those who aren't. I want to make the world better, if I can."

He's had an immediate response. He said he had 50 phone calls the day the salon became available, and there was a similar response when another apartment opened up.

"You can do luxury houses and apartments, but there is a little more risk there, because if there is an economy downturn, you have people moving out of luxury and into simple affordable houses," he said.

Someone advised him to raise the rent to $1,100, but he demurred.

"I think I'm managing my risk a little better by having an affordable price plan at $750 an apartment," he said.

Sometimes that means a little more scrambling for him.

"Currently my interest on my loan is $3,500/ month because I'm 19 and banks wouldn't loan to me. I had to get some creative options together where my interest is just insane," he said. "Yeah, I'm losing money every month, but at the same time, I feel like there is a balance there. It's hard to balance and trying to be a good person, it's pretty difficult."

The big bills every month have forced him to think outside the box. When I caught up with him on Sunday, he was converting one of the storefronts in his building into an apartment.

It's just one way he's found to add more value to his new property. He's also planning to add storage in the basement, and he's had to raise the rent, but not much, to cover a water bill every month.

"I did not like doing it," Anderson said. "That's not a fun spot to be in. There was a lot of concern from people. People are used to a price."

"Someone has been here 20 years," he added. "It's hard. But at the same time there is a business point of view, where I have to not lose the property either."

On the bright side, he's added even more value to the building by re-renting two apartments,

"Because commercial real estate, every $100 you increase the rent is $15,000 value added," he said. "I never imagined. I didn't even put that many hours into re-renting apartments or changing the salon into an apartment. But the couple days I spent, that's six figures made."

Eventually, Anderson wants to set up a scholarship at the high school. When he was younger, there were three books about money and work that made an impact on him, and he hopes to encourage other students to read them as well, by providing a financial incentive.

The books are Rich Dad Poor Dad by Robert Kiyosaki, Think and Grow Rich by Napoleon Hill, and The One Thing by Gary Keller and Jay Papasan.

"When I was a freshman," Anderson said, "I asked my mom for $100 to go to the prom or something. That was four hours of work for her. That's really all money is, is someone's time. I never liked that."

He envisions a different future for himself, hoping to create a life where he can not only provide for his children, he can spend time with them, not tied down to a 9 to 5 job.

"I always knew that I had to do something that wasn't paid by the hour," Anderson said.

Clearly it's not an aversion to work.

One of his mentors is an old classmate, a friend who maybe didn't finish high school, but it didn't stop him from finding success.

"Seeing him work makes me want to work," Anderson said. "I love being around people who do cool things. He's very smart and hard working. He's teaching me how to work on houses and how to frame them out. I don't even think about the hourly pay when I work with him, I just think about how much I'm learning. I'm so happy because I'm learning so much. I'd almost do it for free. It's not easy work, working all day out in the sun. I think if you have a different mindset about work, it makes it a lot more fun, and able to push back past the barriers of 'oh its a 12 hour day, I don't want to go to work today.' And those days do come."

Sometimes he thinks about his plan to go to college and having the typical experience, but what he's doing feels right, right now.

"I think if I'd stuck with finance it would have set me up well perhaps to go into a 9 to 5 corporate gig and I would have been stressed out," Anderson said. "I don't like that setting. I don't think I would look forward to waking up every morning."

"If I was counting the mornings I enjoyed waking up versus the ones that I didn't, this would be better," he said.

He admits there would be a lot less risk in the 9 to 5.

"One of my best friends asked me, why are you doing it?" Anderson said. "'You're stressed.' I started thinking about it. I've enjoyed every moment of it, even the stressful parts. I can't say I'm bored."

Once again, a great article from an excellent journalist on the topic of a smart young entrepreneur who will do well managing this building.