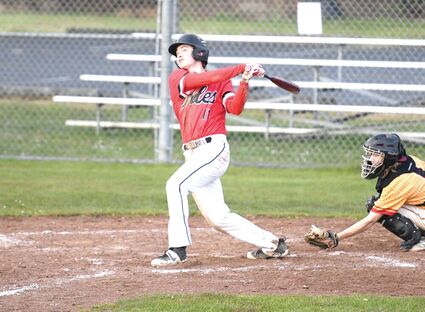 Tanner Collupy smacks a solo home run in the Mules' 14-0 win over the Winlock Cardinals.

Baseball games were delayed by weather more than once in the past week, but the Wahkiakum Mules were still able to get in a little playing time.

They lost 16-6 to the Napavine Tigers on Saturday.

"It was our first game in over two weeks, and we certainly looked rusty," Coach Garrett Radcliffe said. "Errors cost us big time, as Napavine jumped out 8-0 in the first inning. Tanner Collupy and Dominic Curl did very well pitching for us, but the defense just wasn't there."

"We have Winlock and Toutle Lake scheduled this week," he said, "however, with the weather forecasts the way they are, I'm not sure either of those games will happen. When they do, we will just look to lift ourselves up by the bootstraps and get right back at it."

Get back in it they did.

The Winlock Cardinals came to Cathlamet for a double header against Wahkiakum on Tuesday. The Mules took the first game 14-0 in a shortened five innings and lost the second 8-6 in five innings.

Fortunately for the record book, it was the first game, which counted as league play, that mattered.

"Overall the Mules did well, with Curl dominating on the mound, throwing four innings of one hit ball," Radcliffe said. "We were disciplined at the plate and drew many walks. This helped us defensively as we had a season low one error." 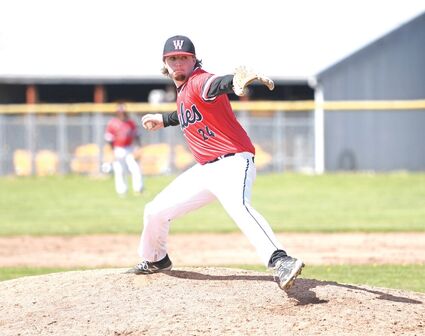 Hank Bassi delivers a pitch to a Napavine batter.

"We played really well in the first game," Coach Radcliffe said. "The second game, while a loss, was still successful for us. We were able to get younger guys in the line-up to see some at-bats, get some pitching in, and overall game experience. They were still able to get six runs on the board and stay focused throughout the game. I felt getting those young players experience was important in our development.

"Winlock is very, very young so I'm really looking forward to competing with them these upcoming years," he added.

If Mother Nature allows, the Mules will head to Lower Columbia College on Friday to play Toutle Lake and to Stevenson on Tuesday for a doubleheader.