Mules win 2 to move into districts 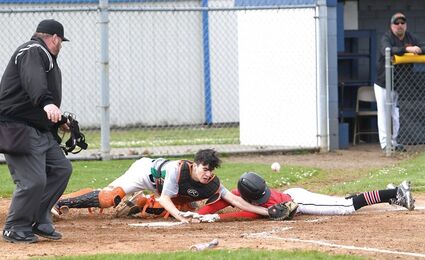 Grant Wilson slides into home for a run for the Mules in their win over Morton/White Pass.

The Wahkiakum Mules baseball team learned all about second chances this week and made the most of an all out two game battle on Tuesday to clinch the remaining berth to the district tournament.

On Friday, a win would guarantee a trip to districts, but the Mules were unable to get it done. They lost to Onalaska, 12-0.

"Unfortunately we simply did not show up," Coach Garrett Radcliffe said. "The pitchers were unable to hit a moving strike zone and free bases really cost us."

Hopes were renewed when Stevenson forfeited a game and Rainier beat Winlock, creating a three way tie between the Mules, Rainier, and Morton, who were all suddenly vying for the seventh and final seed to the district playoffs. 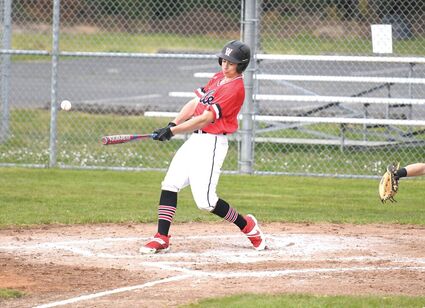 Teo Roch gets a hit in the Mules' win over Stevenson.

To settle the matter, the teams held a two game, losers out, tiebreaker on Tuesday. Athletic directors had a coin flip in the morning, which gave Rainier the bye for the first game. All three teams traveled to Adna where Wahkiakum first took on and beat Morton/White Pass, 13-2 and then turned around and beat Rainier 4-3.

"It was do or die time, we needed to get out there and win or else season was over. So we just focused on what needed to be done and went out to compete," Junior hurler Dominic Curl said.

The two wins mean Rainier and MWP are all done for the season, and the Mules are headed to the district tournament, set to begin on Saturday.

In the meantime, the Mules have one last non-conference game against Mossyrock today (Thursday).