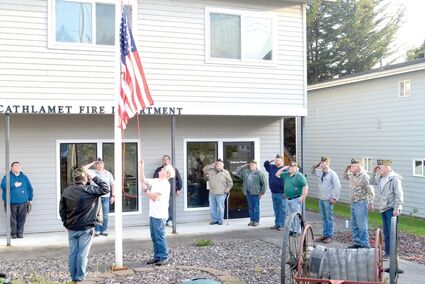 Last Tuesday, the VFW Post 5297 raised a new flag at the Cathlamet Fire Hall after presenting it to the Cathlamet Fire Chief Vernon Barton. The flag previously hung on the catwalk of a C-17 that evacuated a Marine to Germany after he was injured by an IED (improvised explosive device) in Iraq. The local post's quartermaster, Justin Tawater, was a staff sergeant in the Air Force at the time and the flying crew chief responsible for all the maintenance of that C-17. Tawater is now a reserve in the Air Force, holding the rank of tech sergeant. "It makes me feel proud," Tawater said."A flag that flew over in a C-17 to save a life is flying in our town." Photo by Diana Zimmerman.