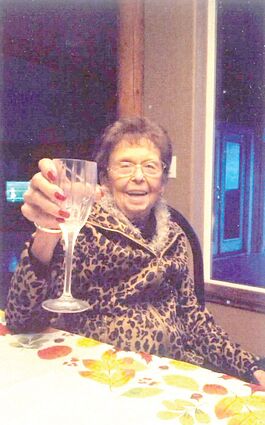 Vivian Luella (Wika) Olsen passed away peacefully at home as she wished on April 15, 2022 at the age of 89.

Vivian was born to Torleif and Hazel Wika on August 18, 1932 on Puget Island, Washington.

As a child she attended school on Puget Island and then onto Cathlamet where she graduated from Wahkiakum High School in 1951.

Vivian married H. Robert Olsen (Bob) on February 5, 1955 and went on to have three children Rebecca, Robert and William.

Vivian was a devoted sister, mother and grandmother and touched the lives of many people in the community. She was proud of how she cooked her own jam and how many blackberries she picked in her lifetime. Vivian even stuck a note on the inside of her cupboard stating that she had "never bought a jar of jam." Vivian was famous for her maple bars, rolls, and her cookies that were eaten after every Mule sporting event. Vivian enjoyed many lunch times with the "Lunch Bunch" kids that would come to visit and eat their lunch during the school day. Vivian worked as a cook at the Ranch House, Hotel Cathlamet and a substitute in the kitchen at J.A. Wendt Elementary. She worked at the Wahkiakum County Courthouse and was voted by her community to serve as Treasurer/Clerk for the Town of Cathlamet.

Vivian was a member of the Sons of Norway. She was one of the founders of the Birthday Club and looked forward to Ladies Night with her friends. She loved to bowl, go to the casino, cheer on her grandkids and son at sporting events, and playing 31 and 99 with her family and friends.

Vivian is preceded in death by her sister Jean Kenner and brother LeRoy Wika. Also by her son, Robert, husband H. Robert and her son-in-law Donald Wolcott.

A graveside service was held April 23, 2022 at Greenwood Cemetery.