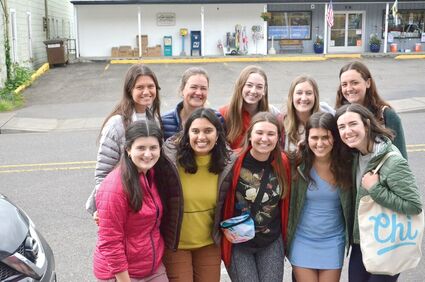 They came; they saw, they had a good time, and they headed out early Friday morning to catch the ferry on Puget Island and head to Astoria on the next leg of a bike ride to San Diego.

"They" are 12 young women doing the Seattle-San Diego Pedal the Pacific ride which is a fund raising activity with a goal of raising $150,000 for the anti-trafficking movement, with funds going to the National Center for Missing and Exploited Children.

The organization's mission statement says: "We ride because every day, all across America, men, women, and children are being trafficked for sex.

"Pedal the Pacific exists to educate all people about sex trafficking. We use bikes as a platform to raise awareness, educate peers, fund raise for leading nonprofits, and develop leaders who believe that no voice is too small to make a difference."

The riders in this year's event come from across the nation: Florida, Georgia, Mississippi, Texas, Minnesota, Louisiana and Illinois.

They said they love the town, which has been a stop on previous tours.

"Every year, we've been coming back," one rider said. "So many girls from the past were excited to hear we were coming to Cathlamet. Your town has been so welcoming."

The riders said their biggest challenge has been adapting to the hilly terrain of Washington and the west coast. They come from places with few hills of any size. And the recent wet weather has been much cooler for them.

"We've struggled on the hills," a rider commented.

The best part of the trip has been the camaraderie that has developed among the group.