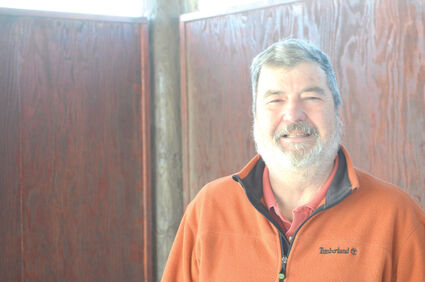 Sam Shogren has never run a campground before but brings a host of skills, experience, and education that may prove beneficial as the new manager of Port 2.

I asked Shogren about his goals as we surveyed Vista Park and the Columbia River from our picnic table.

His biggest goal, he said, was to stay out of Assistant Manager Terina Davis' way.

The comment was unexpected and elicited a laugh, but in truth, Shogren was giving his co-worker a huge compliment.

"The port is lucky to have a very good staff," Shogren said. "I am amazed, in the week that I've been here, seeing the way the staff interacts with guests who come to Vista Park and the community in general. Probably one of my biggest challenges will be to not screw up something that is working so well."

"Terina has got her arms wrapped around [Vista Park] and manages it so well," Shogren said. "[The commissioners] want the new port manager to see how the port can be more active in the community and engaged and working at partnering with community members and stakeholders, and folks on both the east and west side of the county, to leverage what a port can do to provide economic development opportunities and create jobs."

Strong grant writing skills, a background in non-profit work, museums, and tourism are what Shogren is bringing to Port 2.

When he and his wife moved to Portland in 2000, he went back to school and picked up another master's degree in public administration at Portland State University, getting advanced certificates in non-profit management and non-profit fundraising.

"I have worked with non-profit organizations of various kinds for over 30 years, and a lot of that has been focused on cultural resources and maritime history," Shogren said.

Prior to moving to the Portland area, he worked at the Penobscot Marine Museum in Maine and while there, got really involved in tourism, "the economic development aspect of tourism and arts and heritage and cultural stuff."

Shogren says he helped the governor's office in Maine rewrite the state tourism plan and encouraged them to partner with the Office of Tourism in New Brunswick, Canada, a collaboration which continues 20 years later.

He said he worked most recently as the executive director of a Washington County museum but has been doing freelance museum and non-profit consulting for the past six or seven years.

"With the pandemic it's been getting harder and harder to do that," Shogren said. "I've been looking for a way to stay related to boats and water. In one sense museums are also a piece of community development, though most people don't think of them that way."

"I've never run a campground before," he said. "It's not necessary. I need to know enough to understand the challenges that Terina is up against. What do we need to do together? As an archaeologist I look at the landscape of the camp ground and think why are we spread this way or that way. If I look at it having been a museum curator, I look at all the signage and think about what would make it better or easier for people to understand. How do you make things look visually appealing to folks and part of a whole?"

If pressed for a place he calls home, Shogren says the shipbuilding town of Sturgeon Bay, Wisconsin, where he attended junior high and high school. His first job out of high school, he said, was working the second shift in the biggest shipyard, building iron ore boats for the Great Lakes as part of a crane crew.

"I did my first boat delivery with my dad when I was in junior high," Shogren said. "I've been around people in the Coast Guard and the shipping industry for a long time. I also spent nine years as a curator for a maritime museum. I have a lot of familiarity with that industry."

He enjoys sailing, camping with his family, and was an avid skier when he was younger, training in first aid and rescues, and joining the Ski Patrol.