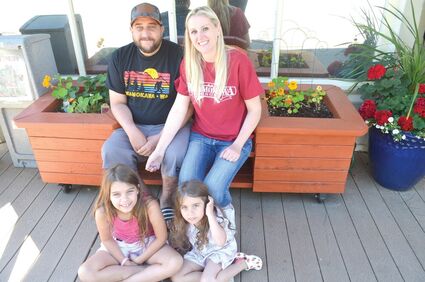 Lance and Shannon Britt with their daughters, l to r, Elle, 7, and Taylee, 4.

Bigfoot sightings are happening every day in Skamokawa thanks to Shannon and Lance Britt of the Skamokawa Resort and General Store, and an artist in Skamokawa named Michael of Black Sea Signs.

The Britts moved to the community nearly 10 years ago after deciding to take advantage of an opportunity to own the property, which includes the general store, their home, three condos, eight hotel rooms, a conference room, dock, gazebo and grounds.

"We weren't planning on moving, but we thought, how can we not try this?" Shannon said. "I always joked that I wanted a bed and breakfast, but you don't want my cooking, so this was perfect. I still get the tourists and all that interaction, but I don't have to make them meals."

The area wasn't a mystery to the couple who hail from the Sacramento area. They had vacationed in Wahkiakum County for several years, visiting family, and enjoying time on the river.

"The view is so pretty and I love watching the ships go by," Shannon said.

There are plenty of places to do that at the resort, including from two of the cozy hotel rooms above the General Store. The original wood floors remain, the light from the windows brightens the rooms, and the balconies in the back two rooms invite visitors outside. The good views continue in the condos, which have balconies, kitchens, and jacuzzi tubs, and can accommodate more people.

The conference room has been used for many events over the years and will soon see its third wedding party.

The Britts welcome partnerships, and have been blessed by one with Columbia River Kayaking. They have been hosting participants in a Road Scholar program put on by the kayak outfit, which has been very popular and brings people from all over the US to Skamokawa every couple weeks this time of year.

Visitors can get their meals at The Duck Inn, or pick up something at the store, or make their own meals if they are staying in a condo.

"It's good to come and forget about driving anywhere and just relax," Shannon said.

There is plenty of outdoor space, but if someone is looking for more, or a walk on the beach, it's not far to Vista Park.

A lot of people from urban areas have stayed at the resort, looking for quiet.

"'It's like stepping back in time,'" Shannon has heard them say. "Things are so peaceful, and people are so nice to each other. They enjoy the small town vibe."

The partnership with Black Sea Sign Company happened organically. The owner and artist, who so far has only been identified as Michael, lives in the community. He would stop in the store to pick up something and talk. He offered to do some sketches and things went from there. The Britts loved his first sign so much, they decided to requisition an entire Bigfoot family, loosed basely off of them and their two daughters.

"Everything he does is just unique," Shannon said. "We gave him some guidelines, like what we wanted the costumes to look like, but just let him do his magic. The final product was so cool."

They were already selling a lot of Bigfoot merchandise in the store and have an informal collection of items, a kind of museum, that celebrates the elusive character. It was shared with them by a local Bigfoot enthusiast. The Britts even purchased a couple costumes and have been known to run around in them, bringing drivers off the highway just to look and honk, or to visit their store.

The signs will surely bring in some new customers, who may have driven past the old store year after year and never thought to actually stop and check it out.

"I was amazed. I couldn't have asked for better signs," Shannon said. "We've gotten so many compliments, people stopping to get pictures next to them. It's a fun way to get people to know what's over here. This is what we needed." 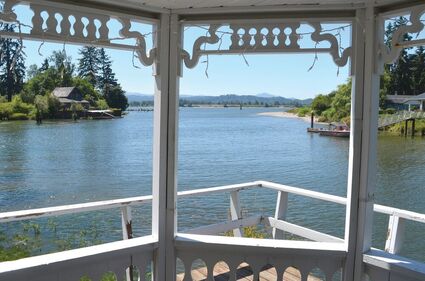 Views from the gazebo.

Along with all the Bigfoot merchandise, customers can pick up snacks, retro sodas, and check out the nine coolers worth of regional craft beers that are carried at the Skamokawa General Store.

"We call this place our first baby," Shannon said. "We had the store for about two years, and the resort, before we had kids. So we spent so many hours, this is where we were because we had to learn the business. You have to learn every part of it. I would never ask somebody else to do something that I haven't done myself before. You have to know how to run your business before you have somebody else step in and do those things."

"We've enjoyed it," she continued. "There is always something new, we are always meeting new people, and the biggest reward is people are coming back, that lets you know you are doing a good job."