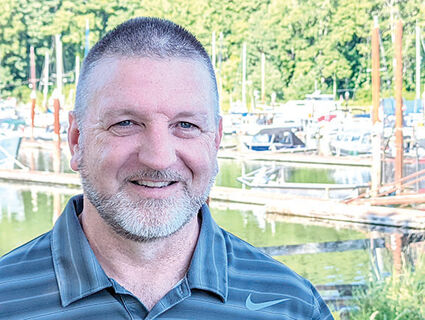 As someone who grew up here, new Wahkiakum County Port 1 Manager Todd Souvenir knew what the marina meant to local people. He has been delighted to learn over the past four years that the tourists who repeatedly visit the marina have come to love the community as well.

Bald Eagle Days were already percolating on Friday, with nearly 50 yachts lining the docks at the Elochoman Slough Marina. The cabins were full, and there was a wait list for RV and camp sites.

Many who made their way up the stairs to the marina office were repeat customers from all over the region. They may have dropped in to ask a question or to deal with business, but several stood by the door to the back office to have a brief chat with the new Wahkiakum Port 1 Manager, Todd Souvenir, or to congratulate him for his recent promotion to "Harbormaster."

It was obvious they already knew and liked Souvenir, who has spent the last four years at the port as the maintenance manager, a job that was hardly limited to maintenance. With a small staff, almost everyone had a hand in taking phone calls, making reservations, and all manner of customer service.

Souvenir was born and raised in Wahkiakum County, growing up in the Elochoman Valley. After he graduated from high school, he headed north to Seattle where he worked for Coca Cola and started a family with his high school sweetheart, Kristen. A few years later, with a toddler and a newborn on their hands, the pair decided to return to their home town, considering it a much better place to raise their kids. Todd continued with Coca Cola at the Woodland branch before taking a job at Vancouver Bolt. He joined the school board for a while, and then became the assistant basketball coach at Wahkiakum High School, eventually stepping into the head coach position.

In 2018, he was hired as the maintenance manager at Port 1. When former Manager Jackie Lea retired this year, Souvenir was a natural selection to take the lead.

One of the port's objectives is economic development, and Souvenir recognizes the value of good customer service as a big piece in bringing people back again and again to the county to spend money at local restaurants and stores.

"I really enjoy the customer service aspect," Souvenir said. "It's a challenging portion of the job, but it's fun and I think it's also how you drive return business."

Souvenir tells his basketball players that how they act on the court or in public is a reflection of the school, their coach, and their community, and he feels the same about himself, the port and port staff.

"How we represent ourselves is a reflection of the community," Souvenir said. "How we treat people and how the marina looks is a big piece of the business down here. The more of an influence and impact that our staff can have in that way is a positive in the community."

And while customer service is important, Souvenir knows that the marina itself is the port's priority. He spoke about the marina founders, Russell Irving, Robert Bacon, and Alan Johnson who saw the decline of agriculture and the installation of dams on the river and wanted to "drive dollars into our community."

"They wondered, 'How do we bring pleasure craft and tourists into the community to infuse some of that growth?'" Souvenir said, adding that the sentiment hadn't changed.

"How do we make the marina better? Souvenir asked. "I think the number one goal is to focus on the marina itself, whether it be improving the docks, increasing power, maintenance, improving signs and communication, and making the marina a first class experience."

He hopes to honor everyone that has come before him, be it commissioners or managers, with the improvements they have made, whether it is the cabins, the RV park, or the facilities as a whole.

"Those all need to be maintained and in first class condition when we have visitors come in," Souvenir said. "I think that is really important. Because again, that drives return customers."

He is also thinking about how the port can grow, as they look for opportunities to buy property, or to create a business park or development to bring more businesses into town.

"I'm really excited for the opportunity to work in the community," Souvenir said, "but I also enjoy working with the county and city, or the Marine Resources Committee or other groups. It's fun to see our local governments trying to do positive things for everybody in the county. I enjoy that part of it as well."