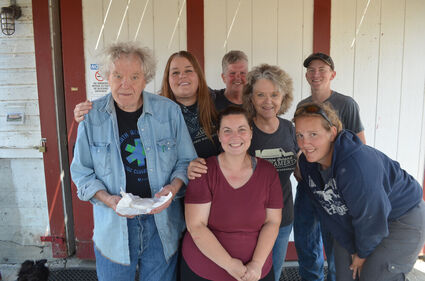 It was an extraordinary moment for Little Island Creamery's owners and team last week at the American Cheese Society awards ceremony, when their brie took first place in national competition.

The society is the only organization in North America that does any rating for cheese, according to Kathleen McDonald, who owns the creamery with her brother Dick McDonald.

"It's stunning news," Kathleen said. "We're stunned. We did not expect this. It's all the big names, it's Tillamook, Rogue, it's Cabot, it's Beecher, it's half of Wisconsin."

"It's an awful lot of Vermont and New York," Dick added.

They only use Jersey cow milk at the creamery, and Kathleen is quick to point out they have the best Jersey cow handler around, as well as good Puget Island grass for the cows to eat.

"We have the trifecta," she said.

Kathleen said that things changed for the creamery after a visit from a consultant about three years ago. It led to a remodel, a change in their procedures, and a narrowing of their focus to brie, curds, and butter.

"It's been really amazing since then," Kathleen said.

That was also about the time that Dietz joined the team, who eventually worked her way up to head cheesemaker.

Dietz was certain of her love for agriculture, and she knew she was good at growing things, but she never imagined this. Self taught, she's discovered a love for the science and art involved in cheesemaking.

"To deliver this to Dick," she started. "He's so selfless, he's taken care of all us like his own family. For all of us to come together and show him how much love we have. We really love him a lot here. We really support each other."

"Everything here is small batch," she continued. "I have a separator from the 1930s that we still use. It's perfect. It's such a beautiful thing to be apart of. Everything is so small, so our hands are constantly in it, which means our energy is constantly in it."

It's clear that a lot of love goes into the creamery's products, and it extends to the cows. They've learned at Little Island that unhappy cows make unhappy milk. The barn is used for events, including weddings, and one night during the evening milking, the music and line dancing disturbed the Jerseys. The milk reflected it, and they quickly implemented some changes to make sure it didn't happen again.

"I'm really proud of our staff, of everybody," Kathleen said. "It's a team effort. I feel really lucky with the people that we've got working for us."

"For us to get noticed," Dietz said, "it's taken all of us to do this. It's really incredible."

Little Island Creamery products can be purchased on site, at the Cathlamet Market, and at River Mile 38 Brewery. They are also available at a few locations in Astoria and in Seaside, Manzanita, and Cannon Beach. Check http://www.littleislandcreamery.net for more information.

One is to place unwrapped brie on baking sheet covered with parchment paper. Place in an oven at 350 degrees for 10-15 minutes before transferring to a board and drizzling with honey.

"It will be melted and gooey," Dietz said. "Crackers or a baguette both work great."

Her favorite way to enjoy the cheese is at room temperature or slightly warm round of brie, sliced and put onto toasted sourdough with a slice of pear.

Winning first place qualifies Little Island Creamery's head cheesemaker to attend an exclusive cheesemaking course in France. There's been a GoFundMe created to help Lori get there- please consider contributing if you can! https://www.gofundme.com/f/acs-brie-champion-lori-dietz