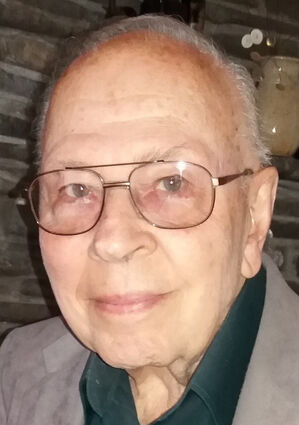 Russell graduated from Wahkiakum High School in 1953 where he was Student Body President. Following graduation, he spent some time working on the family farm before enlisting in the USAF where he served from 1957-1960. In 1959, he was named Airman of the year; that same year he married Mareeta Francis Leslie. Together they had two sons, David and Leslie.

On the urging of his superiors, he prepared to enter Officers Candidate School when his Father suddenly passed away. The call of the farm was too much to resist. Therefore, upon his discharge, he brought his new family home to the farm in Cathlamet, where with his brother Ron, and Mother purchased the two farms adjoining the home farm. Building on what their parents started, they developed their herd of registered Jersey cattle to national prominence.

Russell's wife Mareeta passed away suddenly, leaving him with two young sons. Fortunately, his mother was there to help with the care of the boys. Later he met Dianne Davis, his youngest son's third grade teacher, and the following year they married, merging their families. Russell gained another son, Todd Davis.

Russell and Dianne were very active in the Cathlamet Congregational United Church of Christ. Russell served many years in the office of Moderator, and Trustee. He was elected to the Pacific N.W. Committee of Ministry.

Russell loved all sports and was a big fan of the Mariners, Seahawks, and Gonzaga basketball. He played on the 10th Air Force Championship basketball team. He and Dianne enjoyed following son Les through his basketball career from high school to LCC and on to Whitworth University. He and Dianne were Lower Columbia College Booster club supporters for over 30 years.

Russell dearly loved the Lord and diligently served Him for most of his adult life. He felt God had blessed him in his life far beyond his natural ability. He felt so fortunate to have his brother Ron as a partner in their farming enterprise for over 40 years. He loved family get-togethers and was proud of every family member. While he was no longer engaged in farming, he still maintained a fierce love for the dairy industry and especially the Jersey cow.

He and Dianne made many trips to MN and WI, always driving and enjoying every mile, especially the farmland of our beautiful country. Russell spent his later years as caregiver for his loving Dianne until her passing in 2016.

Russell resided at Canterbury Inn in Longview the last 14 months where he expressed his appreciation for staff and the facility daily. Likewise, he felt blessed for the care and friendship provided by PeaceHealth Hospice staff.

A memorial service is planned for 1 p.m. Friday, August 26 at Longview Presbyterian Church. Private burial will take place at Greenwood Cemetery in Cathlamet.