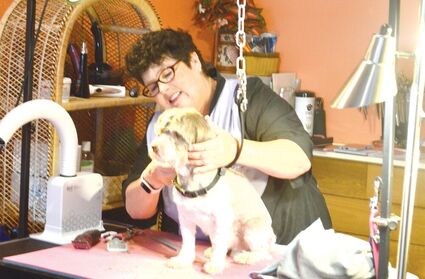 Brenda White opened Aunt B's Grooming on Main Street in Cathlamet last month, and old clients and new ones are keeping her busy.

White has been grooming dogs for nearly 15 years. She worked for a wind turbine company for several years prior to that, but when she got laid off, she decided it was high time she started following her own dreams.

When White was young, she wanted to be a veterinarian. It was too late for that particular dream, but in her own tenacious way, she found a substitute that pleases her.

Her journey began at PetSmart.

They laughed and told her to go online and apply. At the time, the only position available was janitor. She took it. She got up early every morning to clean the store.

When she noticed that fish were dying, she went after her first certification, and was soon caring for them. It was all downhill from there as they say. Pretty soon, White had certifications for everything imaginable in the store.

She still wasn't doing the one thing she wanted.

One day the district manager came in to set up a special display. White introduced herself. She told him about all her goals.

He asked why she wasn't working in the grooming department. She didn't know.

A day or two later she got called into the office. Just like that, she was going into grooming. Soon she was learning how to bathe and do nails.

After a while she had customers coming in requesting her, she said.

Some time later, the district manager returned. He asked after her, and wondered why she was still just bathing dogs.

And like before, he opened a door for her. She began her grooming education for real.

It wasn't without its challenges. She broke down one day shaving a Labrador, but a supportive manager kept her going.

After a couple years working for the company, White decided she wanted to work with special need dogs, the ones that others wouldn't touch. She found a community of groomers with a lot of experience and a willingness to teach her.

Eventually White ended up volunteering for a humane society.

"I practiced all of my hair cuts on them," White said. "Specialty hair cuts like the Schnauzer cut or the poodle cut. They would get adopted just like that."

She said she's taken extensive classes for special handling of special need dogs, as well as first aid and CPR. She's learned to take care of their ears and recognizes health issues. She studied dog psychology and massage, which she finds to be helpful while working with dogs with medical or behavioral issues.

"It's just a matter of training a dog to be groomed," she said. "I don't care how you train them at home. When I'm doing a special need dog, or one that is jumping all over the table, I get them calmed down and give them a haircut, it may not look great. It's gonna look good, but it's not going to look great. I do what I can do without stressing the dog out."

"My motto is 'Every dog that leaves here with a wiggle butt feels like a million barks,'" White said. "No matter what they look like, they've got to feel good."

She has a 40 pound limit. She bathes, trims nails, grooms, brushes teeth, and more. She also trims nails and gives haircuts to cats.

"I just don't do hoofs," she laughed.