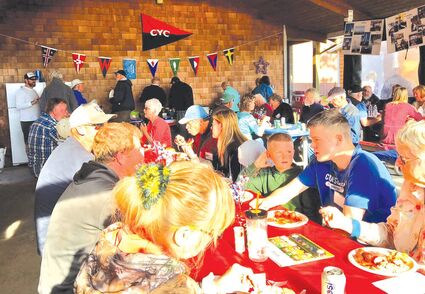 The Cathlamet Yacht Club has hosted several events over the years, including a three day Memorial Day Celebration at the Elochoman Slough Marina in 2018. Members share a general interest in boating, though owning one is not required, and enjoy social and service activities. New members are always welcome. For more information, check out their Facebook page or go to www.cathlametyachtclub.org. Facebook photo.

The Cathlamet Yacht Club, which started in 2008, finds its home at the Elochoman Slough Marina in Cathlamet, and is populated by members from the community, as well as others who live outside Wahkiakum County.

They've found common ground: They are a social group, interested in people, service, boats and boating, and they love this community and this location on the Columbia River.

"We got tired of going to Astoria," Dan Cary, a Cathlamet resident and one of the founding members said, laughing. "We felt there were enough people here and enough interest in boating and the water to do it. We'd always talked about it and finally said let's do it."

"They think [boating] looks like something they'd really like to try," Cary said. "So they get involved with the yacht club and get a chance to go out with people on boats and learn that it is something they really like and want to continue to follow through with it."

Bud Radke, a member from Portland who has been coming to the area for 30 years, really enjoys the social and service aspects of the club.

All one has to do is look around the marina to see some of the work the yacht club has done. They built the advertising kiosk, designed the canvas enclosure for the covered area, twice. They donated a propane heater, and provided life rings and safety ladders for the docks. Right now they are working on a project that will bring bat houses to the marina.

"When we first got going we got tremendous support from [former Port 1 Manager Jackie Lea] and also the port commissioners," Cary said. "I'm not sure we could have pulled this off without them."

"That's a big part of the club, really," Radke said. "We work together. The pavilion is kind of our club house. We have all of our functions there. The port supports us 100 percent and sets up if we need a kitchen set up. We got a lot of support from Jackie over the years, and [Port 1 Manager Todd Souvenir] has stepped up. It's kind of a good marriage, and it makes the members of the club feel good when they can do something that is positive, that enhances the moorage and the community. That's what it is all about. It's not all about boating."

The yacht club has also been instrumental in completing other projects in the county, including refurbishing the gillnetter at Vista Park, putting in new mooring buoys on Steamboat Slough, and cleaning up local beaches. They recently got involved in organizing the Wooden Boat Show.

Because they enjoy socializing, they also organize several events throughout the year, sometimes inviting speakers, like Sharon Sites Adams, who sailed solo to Hawaii. Memorial Day weekend is always fun, and there is a fundraising auction in September. They like to hold races and cruises to different locations, and a Commodore's Ball is held each winter, which gives members an excuse to dress up, dance to live music, eat well, and install new leadership for the year.

There's another bit of fun at that event. It's time to hand out the Bent Rudder award for the biggest boating faux pas of the year. Naturally, there is always a good story to go along with the goof.

"There might be some embellishment in the telling," Cary said. "Someone said, 'Don't let the truth get in the way of a good story.'"

"Some years there's competition for the award," Radke laughed.

Currently the club has around 35 members and they are welcoming more, just know that membership requires sponsorship.

"It's really a matter of showing up for one function, giving people a chance to meet you," Radke said.

Some of those members are kids, and so the club tries to find ways to keep them entertained, like blind dinghy races. At one time there was talk about starting a Junior Sailing Program, but there wasn't much interest from the high school.

"We have people in the club who are expert in teaching sailing," Radke said. "We even looked into getting a small fleet of a certain boat, so they can have little regattas, but so far it hasn't caught on. There aren't enough kids in our club to make it happen."

"We'd teach anyone who wants to learn how to sail," he added.

Another great benefit of membership is reciprocals, which allows members to moor at other member marinas overnight for free.