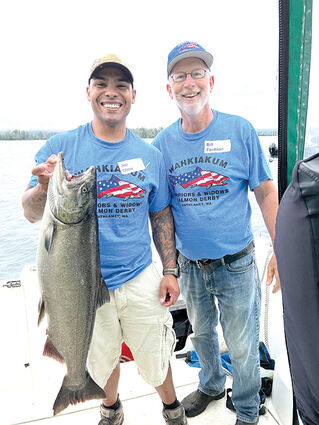 Joe Olmo caught the biggest fish, 13.9 pounds, at this year's Warriors and Widows fishing derby. Olmo, left, is seen here with his skipper, Bill Faubion, who was one of several volunteer boat owners that took participants out on the river to fish last Wednesday. Photo courtesy of Cindy Faubion.

The Warriors and Widows Fishing Derby was held again this year, following a two year hiatus during the pandemic, and all involved were glad to see it return, from volunteer to visitor.

The weather was good, the company was fine, and the dinner on Tuesday was rumored to be the best they'd ever had thanks to a caterer from Toledo, the Crowded Kitchen, which brought tri-tip, salmon, oysters, and salad.

Army Major Hai Pham of Fort Lewis had fished before, but this was his first time out on the Columbia River. He didn't catch any fish, he said, but he did catch a couple naps, soothed by the gentle rocking of the boat.

As for the event, he'd gladly do it again.

His friend, retired Army Major Allen Acosta, who was injured in Iraq, didn't catch anything either, but he was thrilled with the hospitality of the town and planned to recommend the organization and the experience to anyone who would listen.

"Everybody had a good time," he said. "Everything went smooth. Doug [Martin] and I have been doing this, we helped Bud [Mickelsen] from the start. We have an excellent crew to put this together. It's a lot of fun; it's neat to see the smiles on these people's faces when they come down to this small community and see how we cater to them. 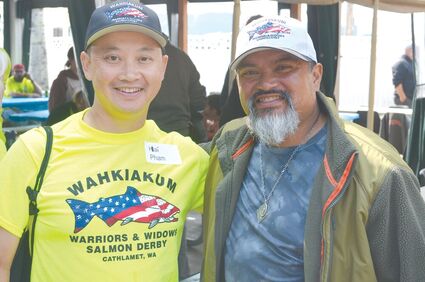 As far as fishing, it was "goose eggs" for Major Hai Pham and Ret. Major Allen Acosta, but it didn't diminish their enthusiasm for the two day event.

"It's what Bud wanted," Johnson said. "Two days before he passed, he asked Doug and I if we could keep it going as long as we could. It takes a lot of time but we know what we are doing now. It's a joy to do it. I look forward to every year.

"We are real thankful for living in a small community," Johnson continued. "Locals here are just unreal."

Everyone who participated went home with a fish, even if they didn't catch it themselves, thanks to some generous donations, and there were dozens of prizes given out on Wednesday after a morning of fishing.

"These people they put their life on the line for us, and they need to be showed how much we care and thank them for it," Johnson said.