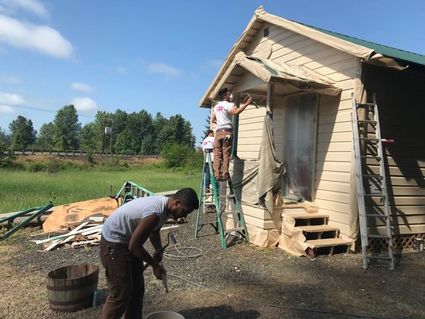 A painting crew touches up the old post office building on the Stella Historical Society site.

It has been almost 40 years since the Stella Historical Museum has been repainted. The cost for painting was approximately $8,500. These funds were acquired from dues from historical society members, fund raisers, government grants, personal donations and bequests from wills by those who passed and felt the importance of preserving this historical post office and blacksmith shop.

Stella's old post office was located across the highway where there is now a garage belonging to Harvey and Barbara Williamson. Harvey Williamson is a historian and property manager of the Stella Historical Museum, but likes to refer to himself as the "property guy" to keep it casual.

The Stella Historical Museum is located at 8530 Ocean Beach Highway (SR4) Longview. They are open the weekend after July 4 through the weekend before Labor Day Saturdays and Sundays 11 a.m. to 4 p.m. The museum can be open by special appointment by calling (360) 423-3860.

The contract to do the painting went to Roxi's Painting from Longview. They took two weeks to complete their painting assignment.

According to Williamson, not only did they paint the museum, but they donated nearly several thousands of dollars of their time by doing repairs on the front of the post office.

Stella was originally called Lawson. John Guisendorffer got a land grant to obtain the river front property before the Homestead Act and sold it to Henry Lawson. The origin of the name Stella, according to historian Williamson, is "lost in the mist of time" and will probably never be known.