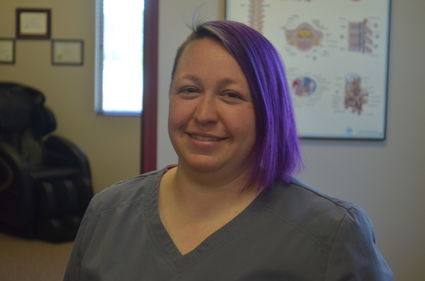 Dr. Dyana Mulvihill, above, is a licensed chiropractor from Phoenix, Arizona. She recently opened an office in Cathlamet and is accepting new clients.

Dr. Dyana Mulvihill, a chiropractor from Phoenix, Arizona, moved to Wahkiakum County this year. She had planned to open an office in Longview, but after receiving some local encouragement, she decided to open one in Cathlamet.

Mulvihill and her family, which includes her parents, her sister, brother-in-law, niece, and two brothers, decided to move to the area after a vacation in Bend, Oregon.

"It was our first time being out in the Pacific Northwest," Mulvihill said. "We thought it was so nice here. We wondered, how can we get out here?"

At the time, Oregon was the goal, but Mulvihill discovered that in order to continue her practice in that state, she would have to get credits in proctology, gynecology, minor surgery, and phlebotomy.

"If I'd wanted to do that stuff, I would have become a medical doctor," Mulvihill laughed.

In Washington, all she needed was four hours of HIV/AIDS training on top of the education she already had, which is an undergraduate degree and a doctorate from Parker University in Dallas, Texas.

Her parents checked out Olympia and Bellingham before deciding to try the Vancouver area. A realtor in Longview started driving them around and that's when they found property in Wahkiakum County.

Mulvihill's path to the practice began when her little sister started to have low back pain. Her uncle had had a negative experience with back surgery and still has issues, many years later. Her father had recently heard a chiropractor speak at work, and wanted to check him out.

Curious, Mulvihill tagged along to her sister's appointment.

"The chiropractor was talking about how aligning the spine helps the nervous system, helps the body function," Mulvihill said.

Thinking it made sense, the whole family gave it a try.

"We noticed a lot of positive changes," Mulvihill said. "At the time, I was having daily headaches, and migraines one, two, three, four times a month. When I started getting regular chiropractic care, I noticed that the migraines eased up, and then the headaches eased up."

Her dad's heartburn got better, and even her sister's allergy to cats eased. Their overall function improved.

"The nervous system controls everything in the body," Mulvihill said. "If you have even a little pressure on a nerve, that nerve is going some place and controlling something, and it could cause some dysfunction."

The chiropractor noticed Mulvihill's interest and told her she'd make a great chiropractor. He pulled up a list of schools and suggested that she consider Parker University.

She did a little research and discovered that there was going to be a seminar in Las Vegas, which was about four hours from their home in Phoenix.

"I loved it," Mulvihill said. So she finished her undergraduate work and headed to Dallas.

"It was really hard," she said. "Parker does trimesters, and school is year around. We were taking 33-36 credits hours each trimester. I was in school from 7 a.m. to 7 p.m. It was brutal."

"Chiropractors actually take more education hours than medical doctors, the general practitioners," Mulvihill said. "A lot of people think that chiropractors are just massage therapists that are glorified. It's different."

She uses a combination of adjusting techniques: Diversified, which is a manual technique with all the pops and clicks, as Mulvihill describes it; the Thompson technique, which is a little more gentle and uses the table to lift and drop for adjustment; and Activator, which uses a little tool to tap and push vertebrae toward alignment. It is the most gentle technique of the three, according to Mulvihill.

It all depends on the client and what works best for them.

Mulvihill is excited about her new compression table.

"People that have problems with stenosis, bulging disc, protruding disc, or disc desiccation, when you are losing height of a disc," Mulvihill said, "this table does this motion where it pulls and relaxes and causes a vacuum inside the disc and can pull fluid back into the disc and help puff it back up."

Her office, Care 31 Chiropractic, is having a soft opening right now. They are still waiting for some equipment to arrive. 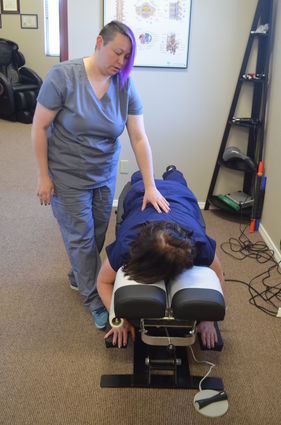 Right: Dr. Dyana Mulvihill does an adjustment on her mom, Teresa, as a demonstration. It's a family affair at Care 31 Chiropractic, with mom in the front office.

Normal fee for first visit is $60, which includes a consultation, exam, and adjustment, as well as some time in a massage chair. They are having a special right now and the first visit will cost $39. Adjustments cost $40, and time in the massage chair is included in that as well.

They don't take insurance because they want to keep their prices low. It would require another employee to deal with insurance companies all day, and they would have to raise cash prices to cover the position, Mulvihill reasoned.

"We really want to be able to help people," Mulvihill said. "We want them here, we want them to get better. We want to be of service to the community. We've already had some happy people leaving, doing the shoulder wobble."

Mulvihill graduated from Parker University in 2012 and got her license in 2013. She worked in an office with other chiropractors in Phoenix before moving to Wahkiakum County.