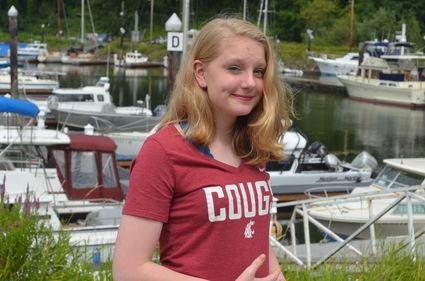 This year there are two young women vying for the Wahkiakum County Fair Queen. The one to raise the most money for the fair will be crowned on Thursday evening.

They are Genevieve Fleming and Madeira Wynn.

Fleming, 13, is an eighth grader at John C. Thomas Middle School. She decided to join the fair court because her mom was Wahkiakum County fair royalty when she was young.

“Now my papa thinks it’s going to be a family tradition kind of thing,” Fleming said.

At one time, she was going to show a cow at the fair, but it didn’t get it’s shots on time. And dad’s family reunions always seemed to be during fair time, but this is her year.

Fleming has spent her whole life in Wahkiakum County, first on the Island, and more recently on seven acres in Skamokawa.

“We had a lot of land,” Fleming said, “and then we decided to get cows and goats, and we’re raising a chicken right now. There’s a dog and a stray cat, and a regular cat. The stray cat had babies, so now it’s like a cat farm. We’ve got a whole thing going. We could have a petting zoo.”

“The first cow we had to bottle feed. She’s like a dog basically,” Fleming said, laughing. “That’s how all our animals turn out, like dogs. The chicken follows us around. He likes oatmeal cookies. It’s his favorite. The cat is trained better than the dog. The dog is the least dog-like animal there. But the cow comes to her name and snacks. She’s a big baby.”

Mr. Pillar is her favorite teacher.

She jokingly asked him one day if she could teach a class, and he handed her a lesson plan on how to find the area of a circle, which she taught to her classmates.

“It was amazing,” Fleming said. “He sat in the class and asked questions and the principal came in and told me I had good leadership skills.”

She’ll be taking algebra this year, and gets math books for her birthday.

“I really like math because there is always an exact answer,” Fleming said. “I like to complicate it and do the problem backwards.”

After she graduates from high school, she wants to go to Washington State University and get a degree in teaching, so she can be a middle school math teacher.

Mr. Pillar will be pleased.

Fleming also enjoys basketball, which she has been playing since the third grade. She will tackle volleyball for the first time this fall.

For fun, she likes to read, do math, and Sudoku puzzles.

Look for Fleming in Skamokawa this weekend. She’ll be having bake sales on Saturday at the Skamokawa Town Center and at The Duck Inn on Sunday.

Genevieve is the daughter of Doug and Crystal Fleming.

Madeira Wynn, 17, is going to be a senior at Wahkiakum High School.

She and her family are pretty recent transplants, coming all the way from Denver, Colorado.

“We threw a dart at a map,” Wynn said. “We were looking for houses near Chehalis and Centralia because we have family there, but we clicked something weird on the website and a random pin appeared in the middle of nowhere. We checked it out.”

That middle of nowhere turned out to be Cathlamet.

“It was kind of hard being the new kid and not knowing anybody and diving in head first,” Wynn said. “But I wasn’t too mad about the move. I wanted to move.”

It’s been a great experience, and she’s made some good friends and met a lot of people.

“One of my closest friends here was a fair queen a couple years ago,” Wynn said. “She introduced me to the whole fair community and told me I should run. So I did. She wanted me to have that experience too.”

She’s held several bake sales, and even participated in one of Port 1’s trunk sales at the Elochoman Slough Marina.

“I wanted to do 4-H when I was younger. In Denver, everything was far away,” Wynn said. “Living here, I now have metal work in the fair from one of my mechanics classes at school. I’ve kind of just been involved through school or through my friends, who are in 4-H or FFA.”

Her favorite teacher is Mr. Hurley.

For fun, she likes to play softball. She’s played competitively for more than seven years, as catcher and at second base. Recently, she had a tryout for a competitive club team.

“I can be playing year round again,” Wynn said happily. 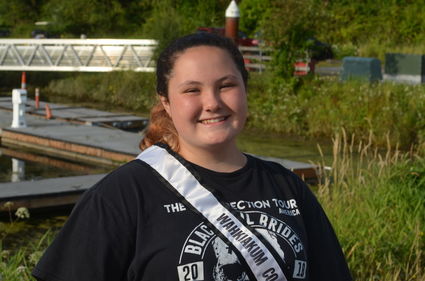 She works for her mom, taking care of her two younger brothers. Her youngest brother, at 9, looks even younger and has long curly hair. He uses these two assets to his advantage during the school year, getting hugs from all the middle school girls.

“By default my middle brother has a lot of friends, because he has my younger brother for a wing man,” Wynn laughed.

Wynn plans to go to a four year university to study electrical engineering and social science after graduation. And play softball.

She also likes to go to the beach.

Madeira is the daughter of Kim and Stacy Wynn.