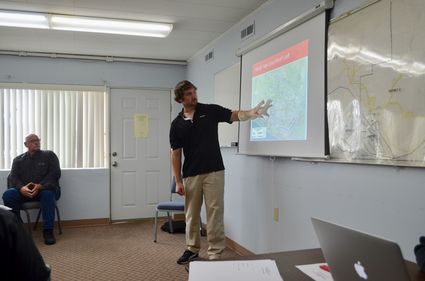 Nick Uhlrich of Noanet presented initial drawings for a possible broadband infrastructure to the Wahkiakum PUD and some members of the Broadband Action Committee on Monday. Noanet is conducting a Broadband Feasibility Study for the PUD, paid for with a grant from CERB (Community Economic Revitalization Board). Listening at the left is Port District 2 Commissioner Lee Tischer.

After being awarded a grant from the Community Economic Revitalization Board, the Wahkiakum County PUD hired a team from Noanet to conduct a broadband feasibility study, the objective to bring high speed fiber optic line to every resident on the east side of the county.

On Monday, Chris Walker and Nick Uhlrich from Noanet presented their findings from the second phase of the study to the PUD and a few members of the Broadband Action Committee.

About a month ago, Uhlrich and another colleague got a tour of every meter on the east side of the county, in order for Noanet to create a path for a broadband infrastructure.

Walker gave a brief explanation of all the components in the infrastructure they were recommending using a "methodology...most advantageous to the area," which would include 30 percent underground fiber, "the rest of it in the air."

Components were important to the conversation, because they told you about costs, he said.

Walker briefly discussed the pros and cons of indoor and outdoor optical network terminals (ONT), the component installed at the homes. Costs are similar. However, he noted, the closer you get to the center of the house, the more work for the installer.

Uhlrich went over his design, which he had broken down into five service zones: Cathlamet, Puget Island, Skamokawa, Elochoman, and Wahkiakum East. The design built on existing Noanet cable, and added underground and aerial connections to create a backbone for a broadband infrastructure.

Walker had already started to break down some hypothetical costs for construction in each zone.

All this adds up to a more than $4.1 million project for the PUD, which Walker pointed out could be tackled day one, or it could tackled one zone at time.

PUD Commissioner Gene Healy asked if the PUD would have any say in the price set by service providers.

No, Walker told him. The PUD could only say how much the provider would pay them.

"This whole thing is premised on price," Healy said. "We can have all the fancy hardware we want, but if it is significantly more than people currently pay, it isn't going to go. If we're just going to provide a way for providers to make a whole bunch of money, I'm not going to go for it."

"If you get a grant for the whole kit and caboodle that changes everything," Walker added.

"We're not going to be able to do this without a grant," PUD Commissioner Dennis Reid said.