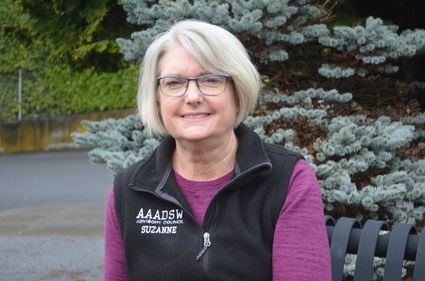 Suzanne Holmes has been honored as the Cathlamet Woman's Club Citizen of the Year for 2020.

"My dad would say, 'There is always a job that needs doing. Be the one who gets it done,'" Suzanne Holmes said. "He was always encouraging us to start. 'You don't know where it's going to take you. You can't see the finish or you don't think you're going to finish first. Start.'"

Holmes is a busy volunteer in Wahkiakum County. Her activities over the years have been so many and so varied that they are unlikely to all be listed here, but it's that drive, and her work with a local summer lunch program that drew the attention of the Cathlamet Woman's Club, and made her their selection for the 2019 Citizen of the Year.

"All of us are a product of our environment," Holmes said. "It shapes us. I was born in the 50s. I have this very clear memory of the impact of 'And so my fellow Americans, ask not what your country can do for you, ask what you can do for your country.' I remember that inauguration speech. I remember how the country rallied around those words. And from the Peace Corps we developed VISTA, the Volunteers in Service to America, which is now Americorps. That was the flavor. And as I grew up in Eugene, that was the community. There were so many opportunities to get involved in different things."

A love for service wasn't the only thing Holmes picked up in Eugene. It might be a silly tangent in a story about the value of volunteering, but it tells you a little more about Suzanne.

"I'm a Duck fanatic," she said. "I grew up a Duck, I will die a Duck. If you go by my house, you'll see. We have a family rivalry because we have Beaver people too. Bald Eagle Days is like Christmas, our family reunion."

And in the midst of that, there will be mischief. Holmes will find a Beaver somewhere. A magnet on her fridge maybe. One year, her son-in-law did an acid etching of a Beaver on her driveway. Any time the sprinkler hits it, there it is again.

Suzanne and her husband, Bill, were on a drive when they turned the corner on SR 4 to see the view of Cathlamet and instantly fell in love. They found some property on Puget Island and began the business of building a home.

"The power of volunteering is getting to know your community through people," Holmes said. "And it's with people with shared interest and passion. I didn't want to be those people on the island building a house and not knowing the community."

With a father speaking words of service, and John F. Kennedy challenging a nation, Holmes realized at a young age that community was a word of action and inclusion, and looked within.

She learned about leadership in scouting. In high school, she was a Candy Striper at the local hospital. She took Red Cross training.

"It was great, because I saw that when I did the little things, it made it easier for people, it made it more comfortable, and it allowed other people around me to focus on more difficult parts of the job," Holmes said. "So I started to see how everybody could do a little bit and make a lot happen."

Later, after raising her four daughters, she went to work for a nonprofit in Coos Bay to provide employment training, and facilitated welfare to work programs, a period of her life that she described as especially meaningful.

One job allowed her the opportunity to work collaboratively with the community.

"That's what I enjoyed the most, creating those bridges," Holmes said. "Creating together, our community."

When a job took the Holmes pair to Canada, Suzanne learned that without a work visa, all she could do was volunteer. While there, she worked with the Nanaimo Volunteer and Information Center Society.

"It was a great concept for how you staff volunteers in a community," she said. "We had a database of people and contact information, with a list of skills, and you could call them up when we had large community events."

It's a vision she has for Wahkiakum County.

"This community runs on volunteers," Holmes said, "but everybody is struggling to get enough people for their boards."

But, she says, a conversation is being had about how to turn that around.

She's a member of the Pioneer Community Association, which started an event held twice a year called Tidy Up the Town.

"I love Tidy Up the Town," Holmes said. "I love seeing people showing up with their tools. A lady, new to the community, showed up with her weed eater and said, 'Where do you want me?'"

"We're picking it up and spreading it," Holmes said. "I'm hoping next year, we can have groups of people sign up and not feel like they have to do one place. Just let us know where you are at, and what you are doing."

There is instant gratification with that kind of volunteerism, but Holmes points out that sometimes the results of your efforts are less apparent.

"I'm on the governing board for Great Rivers Behavioral Health. You may not see any impact in the community, but I can look at the five county region and see that changes are being made when it comes to providing behavioral health services for five counties."

Her biggest passion at the moment seems to be the Outdoor Cafe. The first incarnation of the program was started a few years ago, by Danielle Hobbs, and Our Saviour's Lutheran Church. When Hobbs moved away, they needed a new coordinator.

Eventually, it fell to Holmes. When the program was started, the vision was somewhat hobbled by the rules and regulations set forth by the organization providing the funds.

They had wanted to feed families, but were only allowed to feed kids. Most of the food, of which they had to be so selective, ended up in the garbage, Holmes said.

They have private funding now and are free from the restrictions.

"What resources do we have? What are we capable of? What can we do?" Holmes and other volunteers wondered, and other partners stepped up to help, including Kiwanis, First Interstate Bank, St. James, Wahkiakum Health and Human Services, the Wahkiakum School District, and Wahkiakum on the Move.

During the school year, a high percentage of kids qualify for free and reduced lunches, Holmes pointed out. The GAP program is sending kids home with food as well. During the summer months when students aren't getting those meals or bringing home food, it means that those parents who are already struggling are having to put more meals on the table.

"If children are hungry in a household, it's likely that adults are too," Holmes said. "It was really rewarding to see mom, and grandma, and kids all with each other, and knowing they felt comfortable. That they didn't have to ask for permission."

It became more than just lunch. It became a way for kids to think about being healthy through nutrition and activity. Volunteers provided access to books, projects, play. The kids even learned a little bit about service by making bookmarks and giving them to the school and public libraries.

Wahkiakum Health and Human Services gave all the kids pedometers, and competition sprang from that. They went on walking tours of historical homes in Cathlamet, and visited the cemetery. They made birdhouses, and played with clay, and so much more.

"It was 'Come and have lunch, and stay and play,'" Holmes said. "I just want to bring all the people in and create these opportunities that have an impact on our families and community."

Holmes and her husband, Bill, have four daughters, 13 grandchildren, and one great grandchild.

Holmes will have an honored spot in the Bald Eagle Days Parade, and the Woman's Club will plant a rose in her name in the garden of the historic Julia Butler Hansen home.