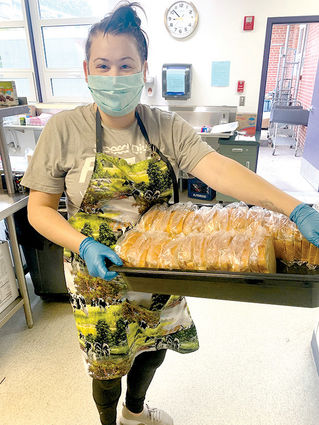 Erin Hill and other volunteers for the Summer Food Program have been making a lot of sandwiches this summer for local families.

If anyone in Wahkiakum County is struggling to put food on the table, it just doesn't have to be that way. There are a lot of resources available and a network of willing volunteers who want to ensure no one is going hungry in the community while the byproducts of a covid-19 pandemic wreak havoc on people's income, savings, and more.

Cecile Bamer is a relative newcomer to the community. She was looking for connection, and something to do, when she got involved with a group that may have started initially with the local Lions Club, but soon grew to include any other unconnected volunteers who simply wanted to be of service when covid-19 changed all of our lives, and kept many people at home. That group became the Lions Club Helping Hands, which is not to be confused with Helping Hand, the food bank on Fern Hill Road.

The Lions Club Helping Hands set up a website, and advertised a contact number that was available to anyone in the county who needed deliveries, whether it was food or medicine, or even a cat returned from a veterinarian in Naselle.

Garrett, a physical education teacher at the Wahkiakum School District, had a little more time on his hands. He also felt a responsibility to a community which was, in essence, paying his salary, in a time when what he should be teaching wasn't part of the remote learning curriculum. And then there were all his children.

They needed to keep busy too, and he wanted to teach them that being a Christian meant you couldn't just say the words, you had to live them.

It was while he was helping unload a delivery to the West End Food Pantry at Johnson Park, that the call came in for the cat.

Why not? He thought. He was there.

Like Bamer, he's not a member of the Lions Club, just one of those unconnected volunteers, who has found himself as a cog in the willing web of providers throughout the community.

Garrett has been making deliveries for the Summer Food Program too, which makes its home out of the kitchen at J.A. Wendt Elementary School, where another group of volunteers are making sure that children and their families, all throughout the county, are getting fed all week long.

The Summer Food Program is led by Suzanne Holmes and Meadow Meeder, who is also the food bank liaison. Meeder has been taking orders, and along with Garrett, helping to make deliveries all over the county. There have been a host of volunteers in the kitchen, more than 21 people, Holmes said, putting the meals together, and getting them ready for delivery or pick up.

Some of the local youth, including recent Wahkiakum High School graduates Madeira Wynn and Novella Hokkanen stepped up this summer to help out too.

Holmes praised Wynn's "can do" spirit, and called her an exceptional young woman who has all the qualities needed for success in life.

On Mondays, Wednesdays, and Fridays, they've been giving kids a hot lunch and a cold lunch.

"Essentially every kid is getting two lunches and the theory is they can put the cold lunch in the fridge for the following day," Meeder said.

The Summer Food Program partenered with the volunteers at the Community Garden, which is run by Winnie Lowsma, Joyce Orr, and Kim Sharp.

"They can't donate the produce to the food banks, because they don't have the number of people coming to them," Meeder said.

The community garden volunteers have been providing fresh vegetables to the school on Wednesdays. The produce goes into a garden bag for the kids, along with a recipe to encourage healthy, out of the box cooking, Meeder said.

On Mondays, the Summer Food Program has been providing an entire week's worth of breakfast foods to the families. On Friday, the families get Gap Bags provided by St. Vincent de Paul. The bags are full of commodities to stock their pantries and make sure there is no food insecurity on the weekends.

The food is available for pick up, but the program also offered to deliver.

"The kids that need the deliveries the most are the one's whose parents are at work and are unable to drive to the school to pick up the food," Meeder said. "Maybe there isn't a car. Maybe there isn't money for gas."

Initially, Meeder was doing all the deliveries, but she contacted the Lions Club Helping Hands, and that's how Garrett got involved.

"Initially, we were able to raise about $4,000 from the community to fund the program, but we were able to hold on to that money after securing a $30,000 grant for emergency funding, thanks to the efforts of Beau Renfro, Dave Bremer, and Duncan Cruickshank," Meeder said.

"Our county is badass at mobilizing and getting things done," Meeder added.

She slipped into her role as food bank liaison.

"In order for the food banks to keep doing what they do and provide as much as they can, the food needs to go," she said. "Getting food when you still have food, they will knock your numbers down."

"Nobody in this county should not have food," Meeder added. "That's for sure. All four food bank coordinators are amazing human beings. They have all agreed if somebody needs food, and it's not the day they can come or it's the day they are closed, we are going to work together to make sure nobody is without food. Everybody is going to be on call. They are all being incredibly flexible."

"It's okay to go to the food bank," she added. "Nobody expected this. There is nothing wrong with needing food. It's a basic human right. We are very unique, that this county has such an abundance of helpers and an abundance of food. That should be taken off people's plate to worry about."

Save your food stamp money. Let it build over the next couple months, she suggested. Use the food banks. Use what is available right now. It's here. It might not always be that way.

Open twice a month, they've been serving 60-75 people a week.

"We've been given a lot of emergency food," Garstki said, "but I don't know what we'll get in the future."

They've stockpiled some of the supply, just in case.

Anyone in need is welcome to just show up, though with the pandemic, they've shifted to a drive up distribution instead of allowing people to come in and select the items they want.

The latter way is better, Garstki says, because there is less waste, and he hopes to go back to it some time in September or October.

They've been helping with the Summer Food Program at the school as well.

"We've given them 72 bags per week for children," Garstki said, "and we had 450 boxes of emergency food available for them. I think there are about 50 of them left."

At the Wahkiakum Food Pantry on Elochoman Valley Road, Chuck Christiansen said they had a lot of food to give out. They won't turn anyone away.

"There has been a downturn in the number of people visiting," Christiansen said, "because of extended money on food stamps and stimulus checks, people were able to go out and purchase the things they needed. We're stocking up, we feel this can't go on forever like that."

Christiansen said the Food Pantry was a good place to pick up items that were hard to find at other food banks, things like dish soap, or laundry soap or toothbrushes or toothpaste.