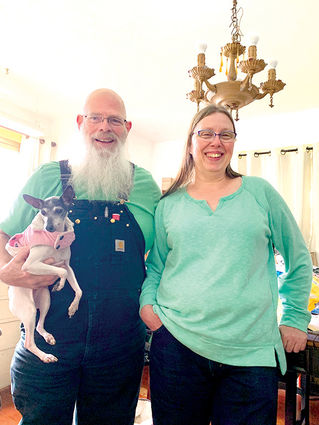 When NovaLee Knopp joined the Wahkiakum County Sheriff's Department as a reserve deputy 20 years ago, she was surprised to learn that some of her duties came with the unofficial title of Elf. Surprise quickly turned to pleasure, as she came to appreciate The Star Program of Wahkiakum County, which was run by the sheriff's office, and helped bring Christmas to local families in need each year.

Though she may no longer be a reserve deputy, she and her husband, John, might still be considered elves. Knopp and John, who has been helping from the start, are in charge of the program, which they basically run out of their home.

According to Knopp, the program started back in the 1970s in the local logging community. The families of loggers who worked in the winter would make sure that the families of the loggers who'd been laid off for the season would still get Christmas.

"As the years went on, and times changed, they kind of started helping out the rest of the county," Knopp said. "It was a program that was run by the wives of the loggers for kids who might not normally have Christmas or presents."

Because they were helping more than just logging families, they began fundraising in the wider community.

It is a need based program, Novalee said, for kids who live in Wahkiakum County and attend school in Cathlamet, providing needed items for newborns all the way up to 17 year olds.

It is not a toy program, though if donations allow, they will try to purchase an age appropriate toy for each child.

Each year, beginning October 31, parents who are concerned about the Christmas holiday are encouraged to stop by the sheriff's office or the Wahkiakum Health and Human Services to pick up an application.

"We are still taking applications," Knopp said. "We would traditionally stop this Tuesday, but the need is there this year, so if we do have what we call emergency applications after that, we will still fill them."

Surprisingly, despite the pandemic, they don't have as many participants as usual.

The Knopps process the applications, transcribing a list of needs for each child on a star, which will be placed on Christmas trees at various locations in Cathlamet and Skamokawa.

This year, the Star trees are set up at the Bank of the Pacific, the Cathlamet Pharmacy, Scribbles, the Video Store, and the Skamokawa Store.

"There's lots of people that line up at the Bank of the Pacific the morning we hang the stars," Knopp said. "I think last year they called 15 minutes after I put the tree up, wondering if I had more stars to hang. This county is absolutely amazing when it comes to taking stars. It's wonderful."

The stars will remain on the trees until December 11, for anyone who would like to shop for a child.

After that, the Knopps hope to have enough donations to shop for the stars left over, or to fill orders on stars when someone only bought one item on the list.

"We'll have elderly people who will take a star, and can only afford one item off the star," Knopp said. "They will get that one item, and return it with the star, and we will take donations and finish that star. I think it's absolutely wonderful that every age of person will take a star."

Shoppers drop off their purchases at the location where they picked up the star, no later than December 14. The Knopps pick them up and sort them.

They are taking extra precautions this year because of covid-19. They are asking shoppers not to wrap the gifts so they can sanitize them. The two of them plan to do all the wrapping.

The week they deliver, the Knopps move everything to the River Street meeting room, where they will be every day until all items are delivered.

Parents are notified when gifts are ready and are asked to call when they arrive so the Knopps can meet them at the door, in order to cut down on traffic.

"John and I, we eat and breathe this, from the time the applications are taken to Health and Human Services and the Sheriff's Office, until the last delivery is picked up," Knopp said. "This is all we do from the time we get up until we go to bed, is work on applications, wrapping, or calling people for clarifications, this is something that we work on all the time. This is our joy, we love helping these kids.

"When we are done, and have moved everything back from River Street to our house, we sit down and smile at each other, because we know on Christmas morning there are some happy kids in this county that got the stuff that they wanted that their parents might not have been able to get for them because they aren't working right now. There's a lot of people out of work. I just want people to know that we really do love this program, we love the people of our county, and we're so honored to be able to help them."

Please note: They do not accept gun related items, including water guns and Nerf guns. They also don't accept religious related items. If a family has other needs, they will connect them with the Salvation Christmas program. For example, one year, a child needed a bed and the Salvation Army was able to provide that for them.

"We try to help, even when we can't help," Knopp said.

Check out the Star Program of Wahkiakum County's Facebook page for more information and updates.