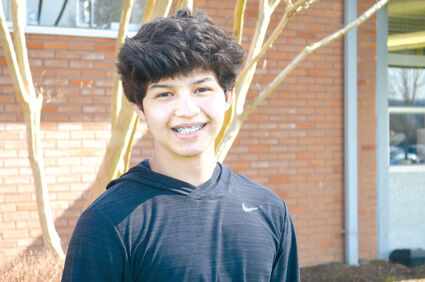 When William Guitron gets his high school diploma in a few months, it won't recognize the education he has gotten working all these years in the family business.

William, who is the third of four brothers, moved to Wahkiakum County with his family from another southwest Washington community about seven years ago.

They opened Maria's Place, and over the years, William has gotten a front row seat to all the angles of running a small business, having participated in most aspects of it.

He spends several hours a week waiting tables, doing a little cooking, or even picking up supplies when needed.

There are two big benefits for working with the family. One, it gives him a bit of authority, and two, he can't get fired.

"I feel blessed," William said. "Most kids don't get the opportunity to work. I'm making pretty good money for someone my age."

Out of it has come a desire to be his own boss. William wants to be an entrepreneur, and own his own business. He's really interested in real estate, whether it's flipping homes or renting properties, but he has also considered opening his own restaurant one day, or perhaps eventually taking over the family's business.

His favorite teacher is Kayli Hurley.

"I like her personality," William said. "She's not always so serious, she can take jokes."

As for subjects, William enjoys math and mechanics. He is grateful for the number of skills he has picked up in Kyle Hurley's classes, learning to weld and paint and more.

Working takes up a lot of his time, so he hasn't gotten involved in any clubs, but he did play one season for the Wahkiakum golf team before he got bored.

In his spare time, William likes to hike and take pictures of sunsets with his phone. He also enjoys target shooting, going out with friends to take aim at clay pigeons any time he can.

William wasn't too pleased about the family's move to Wahkiakum seven years ago. He had his friends and his routine, but he has grown to truly like Cathlamet.

"Most of the time," he said, laughing.

He would like to take a gap year, but a lot of people are advising him against it.

"I have no plans to attend college at this point," William said. "I want to do something else. Everyone says I need to get a business degree. Do I?"

William is the son of Valente Guitron and Josefina Garcia.