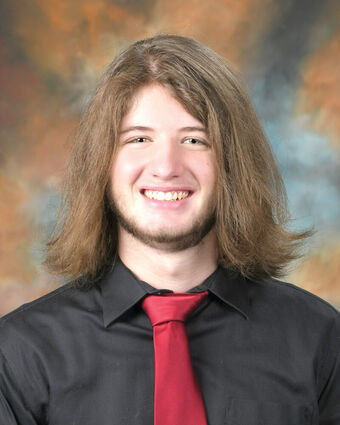 Alex Tantum knows there is a bigger world out there.

He came to Cathlamet two or three years ago, when his stepfather found a job opportunity, but he was born in Florida, and lived in Tennessee and California before coming to the Pacific Northwest.

"It's pretty good," he says. "It's really expensive to live in California."

Living in different places is one kind of education, but Alex has discovered another way to travel and get to know people--foreign films. Foreign everything. He's hooked.

So hooked, he hopes to share his love with others by one day opening a store dedicated to media from other countries.

"It's nice to see other sorts of movies, games, magazines from other countries instead of seeing whatever Hollywood pushes out," Alex said. "I watch foreign stuff once in awhile. I've seen a few Russian movies, and seen a few good Korean movies."

But that's after he retires at 33 or so. Alex has a more immediate goal to become a Columbia River Pilot.

The first time he saw a large ship carrying cargo down the river, he thought, "I want to drive that." The feeling has never left him.

Alex has visited Clatsop Community College and is beginning the process of applying to their maritime science program.

Don Cox and Joel Stetzer are his favorite teachers.

"They hold us to a pretty high standard and they understand we're not the best students but also why," Alex said. "Both of them are down to earth."

As for favorite classes, he wavers between statistics and American Government/Global Issues.

"Because of the teachers," Alex said.

They've been talking about sub-Saharan government issues in Mr. Cox's AGGI class and will soon be discussing governments in South America.

"We just finished a situation report on Chad," Alex said of his team, before laughing. "We have to redo it."

Alex was on the cross country team last year.

"I don't get up to much," Alex said. His friend, Navarre Stewart, who was nearby, laughed. He seemed to know better.

"I collect a lot of video games, I'm the same as any other teenager, playing video games," Alex said. "I like film, I like to figure out what's new, and occasionally watch student films, which can be a little weird, and I like to hear other people's film reviews."

Alex Tantum is the son of Zach and Amanda Doolin.