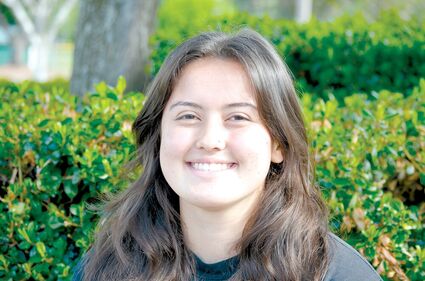 When you love learning as much as Nalani Schultz does, picking a favorite teacher can be hard to do.

"I really did love all of my teachers, but I especially enjoyed talking about philosophy and politics with Mr. Cox because it's always exciting and stimulating," Nalani said. "Mr. Stetzer is really funny and unconventional, so that is always fun, and he's kind of awkward. It's hilarious. I really appreciate him because he told me that he saw me being a physics teacher in a brick building and now I'm pursuing a physics degree. He definitely really had a big impact on the path that I'm choosing. I also really liked Mr. Niemeyer, my weight training teacher. He always told me that I have so much passion and drive, and that always made me work harder."

She's been involved in leadership and Key Club all four years of high school. She is currently the secretary for Key Club and has shared public relations duties for ASB. She was the vice president of her class her sophomore year and was involved in FFA for three years.

Sports were a new adventure for Nalani when she first arrived in Cathlamet, which happened to be the day before Freshman Orientation. It also ended up being her first day of volleyball practice. Since then, she has excelled in volleyball and track, where she focused on field events. She also tried basketball for two years.

"I might not be the best and the strongest or most skilled," Nalani said, "but my coaches have told me that I have drive, and that is really important for me."

Nalani, who plans to study physics at Washington State University in the fall, enjoys solving problems. That's why physics is a good fit and why the different challenges that come with English and math are fun for her as well. She's really looking forward to taking some electives in college, including a philosophy class.

If she could study anything, it might be theoretical physics or astrophysics, but she has some concerns she is being unrealistic and is considering other options, like engineering.

"I get interested in most anything, so it was hard to pick which path to choose," Nalani said. "I really love learning about how things happen and how we got where we are through math, English, history, all of it. The whole shebang."

Nalani Schultz is the daughter of Robert and Naomi Schultz.