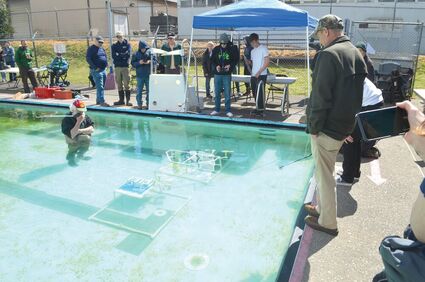 The Naselle High School team made good time in the obstacle course, one event in the SeaPerch underwater robotic qualifier on Friday at the Cathlamet Pool, which was hosted by Wahkiakum Robotics.

Robotic teams from Wahkiakum High School and Naselle High School got some exciting news when they learned they were headed to Maryland in June for an international underwater robotics competition after qualifying at a regional event at the Cathlamet Pool on Friday.

The two teams will compete against more than 100 other teams at the International SeaPerch Challenge at the University of Maryland on June 4-5. The event is co-sponsored by the Office of Naval Research, according to Ron Wright, who leads the robotics program at Wahkiakum School District and Wahkiakum 4-H and who organized the event in Cathlamet.

When the closest qualifying event that Wright could find was in Salt Lake City, he reached out to the SeaPerch organization and asked if he could host an event here. Yes, they said, and while initially Wright was told that only the winning team would get to head to the east coast, last Monday he learned they had opened it up to the top two teams.

"We are incredibly excited to be able to go to Nationals and so thankful that we had the privilege of being invited," Joshua Chadwick, the team captain for the Naselle Bubbleheads said.

There were five teams at the event; two from Wahkiakum, two from Naselle, and one from Issaquah. This included three high school teams, and two middle school teams.

The Wahkiakum teams will combine to make one 16 member team, and all of them found out this week that they get to go to the event and will be staying a few extra days to see Washington D.C. 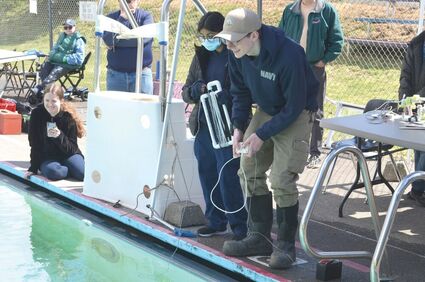 The team from Issaquah didn't qualify for the trip to Maryland, but it didn't keep them from having a good time as they ran their robot through an underwater robotic course.

There were several volunteers from several local organizations who helped make the event happen. They were from the Wahkiakum Amateur Radio Club, Wahkiakum School District, the Town of Cathlamet, the Wahkiakum STEAM Booster Club, and from Georgia Pacific Wauna.

To watch a video of the event go to https://www.youtube.com/watch?v=Pt4cDgd3yn4&t=315s.