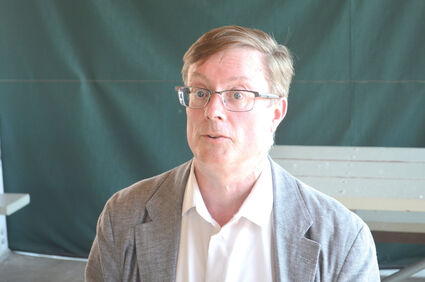 Before he was elected to the position nearly 16 years ago, he was deputy prosecutor for two and a half years, and prior to that, he handled felony trials and felony defense for 13-14 years.

He also worked as an appellate defense attorney.

"I spent 15 years learning the things I turned out to need to do this job," Bigelow continued, "15 years practicing felony trials, prosecuting in district court and in municipal court, 15 years as an EMT, not realizing that I would need it when I became a coroner, 15 years doing appellate work. They wanted me to lean into the appellate defense thing, flying me to Spokane to do cases there. They really kind of invested in me."

"All that appellate work, the civil work I did for the Town of Cathlamet when Bill Faubion was the Town Attorney and would throw me a memo or two, even the land cases and the divorces, and the other little things that people had to deal with, learning all that helped me," he said. "It was a lot of work getting to the point where I thought I could do this job."

After that, he spent his first term trying to "wrap his head around" his new role.

"It is such an immense job," Bigelow said. "I think I hit my stride and I think I do a pretty decent job at it."

Why are you running?

"I am running for the same reason that I ran from the very beginning. I think I'm the best person for the job. I love Wahkiakum County and Wahkiakum County deserves the best. I can't think of anybody else around who could do it better.

"[I have] a fairly wide pathway of skills to come into this with, and more than any opponent I've ever had has had even to start with," Bigelow said. "[I've represented] each and every one of the county institutions. The sheriff's office, the other elected offices of the county. I've done all of that. I've ended up practicing administrative law for the public works department facing OSHA (Occupational Safety and Health Administration) and before the employment security department.

He's worked with the public employee relations committee, handled employment law for the county, including dealing with grievances from union employees that have gone to the state level.

"The bankruptcy laws that I practiced when I was in private practice served me in good stead when I practiced in federal bankruptcy court to protect a lien that this county had," Bigelow said. "This is the sort of experience that not many people have."

"This is a 24/7 job," Bigelow said. "It will take as much of you as you care to give. Sometimes I think I've given too much, but that's my habit, and I'm not going to quit now."

"The issue is going to be that you can't make plans here," Bigelow said. "I can't say I'm going to be concentrating on the drug trade or sex crimes, the fact of the matter is the decision is made for you when you walk into this office, you don't know what is going to be on your desk. Whatever it is, it can be your big thing. When it was Sam Valdez attempting to hire somebody to murder his ex-wife, the resulting trial took up a double digit percentage of the resources of this office.

"That meant that if I had had plans to devote 15 to 20 percent of our office resources to something else, it would have had to have gone by the wayside. Planning is essential maybe, but plans never work. That's one of the reasons that this job takes a renaissance type person, somebody with broad skills, because you don't know what the world is going to bring you. If you look around the state over the course of the last four years, Wahkiakum County stayed pretty sane. What I intend to do is to keep Wahkiakum County as sane and quiet as I can. It's been working pretty well so far."

"The thing that keeps me going: There are certain basic values that people expect from government," Bigelow continued. "These things are best proved in the negative. You leave in the morning, you come back, your stuff is still there. That's government working. And you don't think about it. It's your expectation that this happened. And that expectation requires an infrastructure behind it. You've seen what happens in the cities when that infrastructure is taken away. All the sudden you are not as secure in your possessions. People want to be secure in their property, they want to be secure in their possessions. They want to be safe in the streets.

"These simple little things that people are able to leave, travel safely, get stuff at the grocery store, work for a living, come back, turn on the light, the light comes on, it shows that all their stuff is there. They turn the faucet and water comes out. These little things, that's what government is for. I know there is a big push to make government exciting these days. I want people to choose their own excitement. My entire job is to not be noticed because everything is going okay."

"I try to develop trust," Bigelow said. "We've done pretty well compared to a lot of places these last four years. It's because I'm trying to keep, and the other folks here, my clients, the people that I advise, the people who are really the bosses, have tried to keep things calm here. Not to catch the wave of controversy and add to the shouting and add to the dysfunction, but instead to make sure things still work. I think things have been working here better than in most counties. I'm proud to be a part of it."