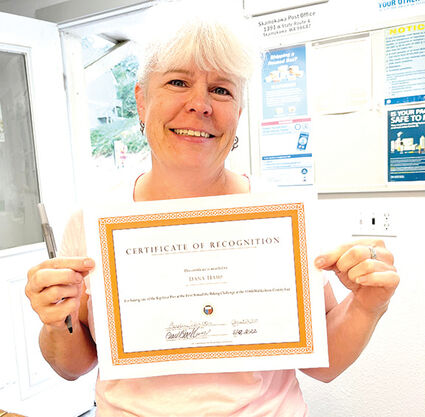 Dana Hamp of Cathlamet made what she called a quadberry pie with marionberries, seedless blackberries, raspberries, and blueberries, using a lard crust. Photo courtesy of Pearl Blackburn.

The fair is only as good as we are, it seems to me. It's not a traveling show that comes to visit the county every year. We have to create our own fun. It's a chance to celebrate who we are and, I think, a perfect opportunity for some good natured competition.

That's why I decided to issue the pie baking challenge this year. I'm so glad I contacted the Woman's Club, and that they ran with it, making the challenge even better with their support, pie kits, sign up sheets, pictures, and certificates for the winners.

I'm ready to do it again next year, and it looks like the Woman's Club and some community members are ready too. I hope you'll join us.

This year's bragging rights belong to Noreen Fitts, Dana Hamp, Diane Hollenbeck, and mother-daughter team of Jasmine and Josephine Saccio, the top four pie bakers at the 2022 Wahkiakum County Fair. Out of 24 entries, this makes them the pie bakers to beat in 2023.

Diane Hollenbeck of Grays River has been baking most of her life, and while pie might be her favorite dessert, it isn't the one she makes the most.

Hollenbeck moved to the area from Denver in 2015, and enjoys the different variety of fruit now available to her. She used Gravenstein apples purchased at a local farmers market in her winning lattice apple pie.

"I usually use an oil pie crust, oil and milk," Hollenbeck said. "It's got a really good flavor and it turns flaky real well. I like it a lot. The only drawback to it is you have to roll it out between two pieces of parchment paper because it will stick to a countertop, even with flour. It's a good crust."

Encouraged by a member of the Woman's Club, she decided to enter the pie challenge, even though she'd never entered anything in a fair.

"I would never have entered a contest at all," Hollenbeck said. "I can't tell you how surprised I was. I did a double take because I didn't realize mine was sitting on that riser...with the sign saying these are the top four."

She pieced this particular recipe together from other pie recipes she has used in the past.

"I've always liked to cook. I've been cooking from an early age, because I was the oldest of six. You learn," Hollenbeck said.

As for next year, she'll be back.

"It was fun," Hollenbeck said.

Dana Hamp of Cathlamet, hadn't entered anything in a fair as an adult, but decided to participate as a way to say thank you to the community for supporting her cleaning business.

"I don't make pie as often as I like," Hamp laughed. "They go straight to my hips."

"I was around baking growing up," Hamp said. "My mom and my father's family were kind of homesteaders. Everything was home grown."

She was grateful for the friends and family who were willing to sample her recent efforts as she practiced making several pies in the days before the fair.

"I was trying to find the best crust recipe. The last one I used was lard. I liked how it came out better, it was a little flakier," she said.

She settled on what she called a quadberry pie. It contained fresh raspberries and blueberries as well as Marionberry and seedless blackberry from Sharrel Mooer's berry patch.

"She has passed, but I wanted to bring a little bit of the community into the pie challenge," Hamp said.

Her secret ingredient? Cinnamon. It wasn't a usual choice for her berry pies, but she tried it and everyone loved it.

As for the pie challenge, she plans to do it again.

"I think it was awesome to get everyone involved in the community," Hamp said. "I think it got a lot more people to the fair this year."

"I love getting to be part of the community," she added. "Wahkiakum County funds my livelihood and my business, so I love being able to give back to the community like this. I didn't expect to win by any means."

Noreen Fitts got involved when Pearl Blackburn of the Woman's Club came to Tsuga Gallery with pie kits and sign up sheets.

"It sounded like fun and a way to get more entries in the fair," Fitts said.

The Fitts family has been involved in the fair for a long time. Noreen and her husband, Joel, were dairy leaders for 20 years and their kids participated as well.

"Usually I take art but I didn't do that this year," Fitts said. "I volunteer with the youth group, and in the youth building. I'm usually the art judge there. I enjoy that. I want to keep it going."

As for pies, Fitts has been baking them her whole life, but she never figured she would win a prize.

"My mom taught me, and my mother-in-law," Fitts said. "My mom made pies, but she made a lot more cakes than pies. I think I have to credit my mother-in-law, because she was the pie baker. My grandmother was a pie baker. I guess it was in the family."

As for her crust, she uses a traditional recipe with half real butter and half shortening.

Jasmine and her daughter Josaphine Saccio of Kelso worked together to make two pies for the challenge.

Using a butter based crust, because Josaphine is pescatarian and lard is out of the question, they made one from blackberries picked from the back yard and another from very tart cherries they bought at the store. 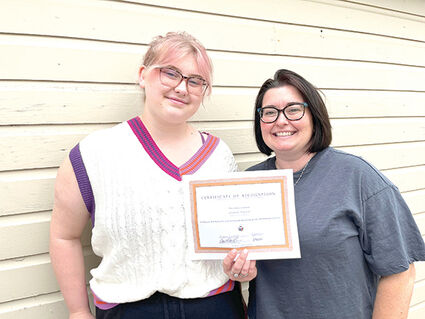 Josaphine Saccio, left, and her mother Jasmine, right, of Kelso, worked as a team to create two pies, one blackberry and one cherry. Both were made with a butter crust. The blackberry was their favorite, but it was the cherry pie that won. Jasmine Saccio grew up in Skamokawa. Photo courtesy of Pearl Blackburn.

They were surprised when the cherry pie won.

Jasmine, who grew up in Skamokawa, entered several things in the fair as a youth.

Josaphine, 16, bakes all the time. She entered the banana bread contest at the Cowlitz County Fair this summer and took second place. She made all the recipe decisions about the pies for the challenge, from the crust to what kind of sugar to put in the cherry pie--brown.

"I added quite a bit of sugar," Josaphine said. "Usually I would use white sugar, but this time I used brown sugar. It made the pie filling a little darker and gave it a more natural sweet taste."

The pair plan to be back next year.

And maybe you will too? Maybe you don't want to make pie. Maybe it's something else. If you'd like to issue your own challenge for next year's fair, let me know. I'd be glad to tell everyone.